What if Hungary went to the 1950 World Cup

This blogger Artur Yanturin of Russia copied many of my blog teams.  This blog was one of them.  It was my Russia All-Time Team here.  His team was written in 2020, but mine was uploaded in 2014.   His Spartak Moscow All-Time team entry of was published in October 2020, but mine was uploaded in 2017.  His entry of the Dutch-German rivalry between Real Madrid and Barcelona was written in 2020, but mine was uploaded in 2014.  He also copied many many of my blog entries.
His Facebook and Instagram
Please also see my All-Time World Cup Team Index.
Austria
HungarySweden World Cup1950
Austria-Hungary 1954
Angels with Dirty Faces with Di Stefano in the WC 1958
Scotland World Cup 1970United Kingdom World Cup 1970England World Cup 1974United Kingdom World Cup1982Netherlands Euro 1984 with Cruyff, Van Basten, Gullit
Italy Euro 1992United Kingdom World Cup 1994
Yugoslavia World Cup 1994
France World Cup 1994
Germany World Cup 2002
Netherlands World Cup 2002
USA World Cup 2010
If Ronaldo and Messi played for Australia in 2006
Brazil 1982 with Careca,etc
Ireland/Northern Ireland Combined Team 1986 World Cup
Yugoslavia World Cup 2018
USSR 2018 World Cup
Parisian nation team in World Cup 2018
Gusztáv Sebes took over the national team of Hungary in 1949. He moulded a team that destroyed every teams on their path from 1950 to 1956, including beating England on the "Match of the Century" at Wembley in 1953 and becoming the first continental European side to beat England on home soil.  Their only defeat came in the 1954 World Cup Final against West Germany, a team that they beat soundly 8-3 in the group stage of the same World Cup.  However, that defeat denied Hungary of a World Cup, and they became one of the greatest side that did not win the World Cup. The "Miracle of Bern" as the Germans called the 1954 World Cup Final was a fly in the ointment for the Mighty Magyars.

Why did I create an imaginary World Cup Finals in 1950 for Hungary?  At first, I intended to recreate an alternative 1954 World Cup team with Laszlo Kubala, István Nyers and others. However, upon further study of the players, I realised that the 1950 World Cup had a bigger talent pool than in 1954. 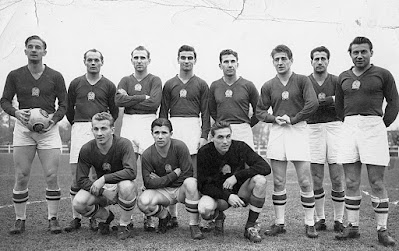 The core of the Mighty Magyars namely Ferenc Puskás, Sándor Kocsis, Nándor Hidegkuti, Zoltán Czibor, József Bozsik and Gyula Grosics already played for the national team in the late 1940's. Laszlo Kubala was touring Spain with his exile team.  He caught the eyes of both Barcelona and Real Madrid in the summer of 1950.  In 1950, Ferenc Deak would be closer to his peak. His goal output sank after 1950.  István Nyers was in the middle of his career in Inter Milan.  By 1954, he left for AS Roma.  Gyula Zsengellér was still around playing in Italy. Sándor Szűcs would still be alive.  Ferenc Rudas had a serious injury in March of 1950, and that injury would end his career early.  In an alternative world,  I could easily "erase" his injury from history if it was only 3 months old.  If I turned this team into the 1954 World Cup team, I would have lost Sándor Szűcs, Gyula Zsengellér and Ferenc Rudas.  I would have question marks regarding Ferenc Deak.  Kubala would be the only realistic addition.
Prediction
It was almost impossible to predict what would happen to Hungary in the 1950 World Cup.  Let's see their head-to-head against some of the best teams in the tournament.  Hungary never played play against Brazil or Uruguay until the 1954 World Cup Finals.  They eliminated both Uruguay and Brazil.  The match against Brazil was known as the "Battle of Bern".  Hungary played 3rd place Sweden twice in 1949.  They won one and drew the other match.  Hungary only played Spain twice up to that point. They lost on both occasions, but the matches were played in the 1920's.  Hungary of course never beat England, but we all knew about what would happen in 1953. Since losing the World Cup Final in 1938, Hungary played Italy 4 times.  They lost twice while drawing the other two times. The latest match was played in 1949 with a 1-1 draw.  I doubt any of the matches would be indications what would happen in Brazil.  The two heavy favorites heading to the 1950 World Cup Finals ended in agonizing defeats.  Brazil would lose the most important match against Uruguay in the match known as Maracanaço.  England as 'The King of Football" lost to amateurs from the United States.  Even through Hungary would have been one of the favorites on paper, anything could happen in 1950.
Team(only 22 players in 1950)
GK: Gyula Grosics Gyula Grosics was part of the legendary Golden Team of the 1950s. He was nicknamed "Black Panther".  He played in three World Cup Finals: 1954, 1958 and 1962.  He won the Olympic Gold medal in 1952.  He was the starting keeper when Hungary beat England in the historical match in 1952.  At the club level, he played for the legendary Honved FC, but transferred to FC Tatabánya after the 1956 Revolution. 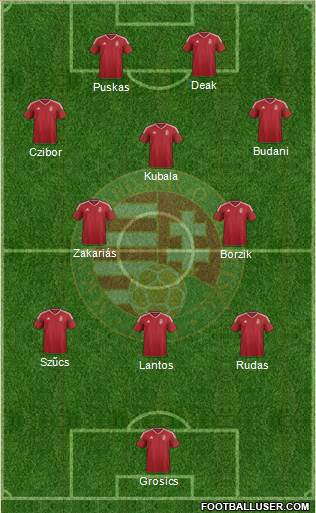 World Cup 1954
Although this team was about the World Cup in 1950, most football history buffs would have imagined what would happen if some of those new players went to the 1954 World Cup Finals.  I could not help not to think about it.  I have not studied the players at the time of the 1954 World Cup so the 22 member squad was not set.  Laszlo Kubala and István Nyers seemed to be the only player who would be selected for my alternative team.  István Nyers had a temporary setback the season before the World Cup. In the 1953-1954 season, he had a disagreement with Inter Milan's management.  He was often benched and managed only 8 goals, but he was considered a big star player at the time.  He moved to AS Roma in the summer of 1954, where he did enjoy two more great seasons. Meanwhile, Ferenc Deak was a shadow of himself while Ferenc Rudas had retired.  Ferenc Szusza, Károly Sándor and Henni Géza might be going to Switzerland on my team, but I needed further research on the subject.
I have been doing a series of  alternative teams.  They were just for fun.  The addition of new players might look good on the paper, but it would take more than good players to win a game.  Some of the star players at the time were removed for political reasons, but Hungary without them went through an undefeated run unprecedented in history.  It would be hard to build a better team than the original Mighty Magyars.
The "Miracle of Bern" happened for many reasons.  Of course, an injured Ferenc Puskas was often cited as the main issue that caused Hungary's defeat in the Final.  He was inserted into the starting lineup when he was not 100% ready.  The new players might be able to replace him in the World Cup final.  However, Puskas probably would have started in the Final regardless of the situation.
Mario Zagallo did start Ronaldo at the 1998 World Cup final.  According to various source, Ronaldo wanted to play.  I do not know what I would have done if I were Mario Zagello, but I understood why Mario Zagello started Ronaldo. It was the biggest stage of Ronaldo's career at that point, and it would be difficult to deny his biggest star's insistence to start.  Ronaldo's situation in 1998 (he suffered a severe fit, and his heart allegedly stopped beating) was far worse than Puskus' ankle injury.  In fact, Puskas was reportedly ready to start in the semifinal, but Sebes stayed put.  Karl-Heinz Rummenigge also persuaded West German coach Jupp Derwall to start him despite doubts about the player's fitness at the 1982 World Cup final.  So if I were the manager of Hungary in 1954, I probably would have started Puskas even through I had Kubala and possibly Deak or Szuszaat at my disposal.
My starting lineup against West Germany
On the original lineup, Gusztáv Sebes placed Zoltán Czibor on the right wing while benching László Budai and starting Mihály Tóth.  No one was sure why Sebes did this, but playing Czibor as an inverted winger was probably not what he had in his mind. On my lineup, I restored Czibor the left while starting Budai on the right.  Kubala could replace either Kocsis or Hidegkuti.  For me, I started Hidegkuti because he was big part of Hungary's offensive tactics. So I took Kocsis. 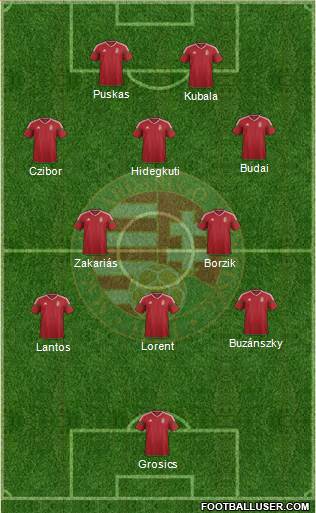 Prediction
The outcome of the team was hard to predict.  The rainy weather on the day of the Final favored the Germans' style of play. They also had received newly designed Adidas boots prior to the final that helped them to play in such condition.  It was alleged that the Germans used methamphetamine, a performance-enhancing drugs that was not a banned in 1954.  Ferenc Puskás also scored a late goal, but the  linesman ruled it offside. However, this decision turned out to be more likely wrong.  So it was also down to bad luck that Hungary lost the game.  And Laszlo Kubala or anybody could not change that.
Conclusion
The Revolution of 1956 would eventually the downfall of Hungarian football.  They had missed their golden opportunities in 1950 and 1954 to win the World Cup.  In the 1950's, West Germany was a country that needs healing for its wartime past.  The "Miracle of Bern" gave the nation its hope, but it would take 18 years before West Germany could claim its football to be the best in Europe. The 1972 European Championship was often perceived to be the turning point in European football.  In quarterfinal, West Germany first beat England for the first time in history, and then displaced the Soviets as the top team in Europe by winning the Final.  Ironically, Hungary's "last dance" at the top of European football also came at the 1972 European Championship.  They reached the semifinal with star players such as Ferece Bene and Florian Albert. No other star player was produced after that generation. They never reached the same height again.  In fact, it took them another 34 years before they qualified for the next European Championship Finals, and they only managed to play in three World Cup Finals since then. 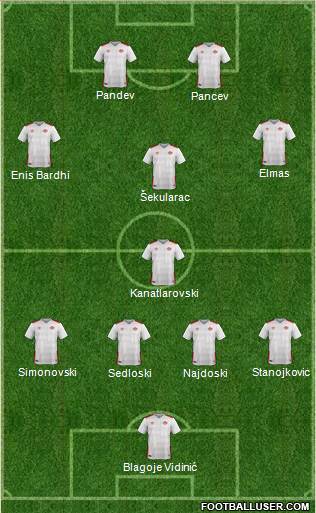 Posted by Soccer, football or whatever at 7:20:00 PM No comments: