This is my all-time team for Polish diaspora (ethnic Polish players capped by other countries).  If there were an All-Time World Cup, this would be the 23 players I would bring to the tournament.

The Polish diaspora is also known as Polonia in modern Polish language.  I noticed that there are a number of great Poles capped by other national teams.

Team
GK: Peter Schmeichel  (Denmark)
He was regarded as one of the greatest keeper of all-time. He was voted the "World's Best Goalkeeper" in 1992 and 1993. He is best remembered for his most successful years at Manchester United, whom he captained to the 1999 UEFA Champions League to complete the Treble.  He is also the most capped player for  Denmark, with 129 games between 1987 and 2001, winning the Euro 92.  His father is Polish.
GK: Ladislao Mazurkiewicz (Uruguay)
Ladislao Mazurkiewicz is considered one of the greatest keepers from South America.  He had 36 caps for the national team. He led Uruguay to the semifinal of the World Cup in 1970.  He was also a participant at the WC Finals of 1966 and 1974. He was voted the best keeper at the tournament. He played with Peñarol at home before moving to play in Brazil, Spain, Chile and Colombia.

GK: Brad Guzan (USA)
Guzan was second overall pick in the 2005 MLS SuperDraft, signing for Chivas USA, with whom he was the 2007 MLS Goalkeeper of the Year. In July 2008, he joined Aston Villa, where he has made over 100 Premier League. appearances.  Since 2006, he has been capped by the USA.  He is mainly a backup to Tim Howard. He went to South Africa 2010 and Brazil 2014.

RB: Laurent Koscielny (France)
Koscielny started his career in the lower division in France before moving to Lorient in 2009.  He moved to Arsenal in 2010.  Less than a season later, he was called up to the French national team.  He had also considered playing for Poland.  The French centerback had played on the rightback for Arsenal.

DF: Juan Carlos Masnik (Uruguay)
Masnik played for Club Nacional and featured in the 1971 Intercontinental Cup. He played in Argentina for Gimnasia y Esgrima de La Plata. He also had two short stints in the United States with the New York Skyliners of the United Soccer Association and in the second in 1975 with New York Cosmos of the NASL. Masnik made 26 appearances for Uruguay from 1967 to 1974.  He played in West Germany 1974.

CB: Phil Jagielka (England)
Phil Jagielka born in Manchester of Polish descent.  He played for Sheffield United before joining Everton in 2007.  The transfer was the highst ever for a Sheffield United player. At the time of writing, he has over 40 caps for England.  He went to Europran Championship in 2012 and World Cup Finals in 2014. His brother is also a professional footballer.
LB: Filipe Luís Kasmirski (Brazil)
Filipe Luis started his career with Figueirense.  He moved to Europe where he played for many clubs, including Ajax, Real Madrid B and Deportivo La Coruna.  He was the starting leftback or Atletico Madrid when they won La Liga in 2013-2014. He joined Chelsea in 2014, but only spent a season there.  His surname is Kasmirski, but better known as just Filipe Luis.  Since 2009, he plays for Brazil.

DM: Tim Borowski (Germany)
Tim Borowski spent 11 years of his 12-year professional career with Werder Bremen, amassing Bundesliga totals of 236 games and 32 goals and winning three major titles, including the 2004 national championship. Borowski played 33 times for the German national team, and represented the country at the 2006 World Cup and Euro 2008.

CM: Théodore Szkudlapski (France)
Born in France of Polish ancestry, Théodore Szkudlapski was better know as Theo.   He played for RC Lens from 1953 to 1958 when he left for Stade Rennes, where he played with Raymond Kopa, another Polish-French player. Two years later, he joined the AS Monaco, where he won the French league twice.  Capped twice for France.

CM: Horst Szymaniak (Germany)
He was one of West Germany's greatest midfielders.  He went to the WC Finals in 1959 and 1962.  He played for SpVgg Erkenschwick, Wuppertaler SV, Karlsruher SC, Calcio Catania, F.C. Internazionale Milano, A.S. Varese 1910, and Tasmania 1900 Berlin. He joined Inter Milan in 1962 at a time when Serie A clubs seldom signed German players.

RW/AM: Pierre Littbarski  (Germany)
Pierre Littibarski was a major star in the 1980's.  He played in three World Cup Finals with West Germany reaching the Final all 3 times. He first made his name playing as a young player at Spain 1982. He finally won the World Cup in 1990.  He spent most of his club career with Koln, but he also played in France and Japan.

RW: Jurgen Grabowski (Germany)
Grabowski played his entire career with Eintracht Frankfrut.  With this team he won the German Cup in 1974 and 1975 and the UEFA Cup in 1980.He was capped 44 times.  He had 44 caps for West Germany.  He went to three World Cup Finals: 1966, 1970 and 1974.  He won the European Championship in 1972 and then, the  World Cup two years later in 1974.
LW: Piotr Trochowski (Germany)
Piotr Trochowski started at Bayern Munich.  He spent six-and-a-half seasons at Hamburger SV before transferring to Sevilla in 2011 and then, to FC Augsburg. Trochowski earned 35 caps over four years. He was part of their squads which reached the UEFA Euro 2008 Final and the semi-finals of the 2010 FIFA World Cup.

AM: Dariusz Wosz (Germany)
Born in Poland, he started his career in East Germany. He started with Chemie Halle in 1984.  Wosz was transferred to VfL Bochum in toward the end of the 1991–92 season. As captain, he led Bochum to its biggest success yet: the third round of the 1997–98 UEFA Cup which was lost 4–6 on aggregate to Ajax Amsterdam.  He also played for Hertha Berlin.  Capped 7 times for East Germany and 17 times for Germany.  He went to Euro 2000.

AM/RW: Raymond Kopa  (France)
His full name was Raymond Kopaszewsk.  He was considered to be "Les Bleus"'s greatest player before the emerge of Michel Platini. In 1970, he became the first football player to receive the Légion d'honneur. He helped France to finish third at the WC Finals in 1958. He won the the European Footballer of the Year in 1958 and won three European Cups with Real Madrid in the 1950's.  He also played with Stade de Reims.
FW: Tadeusz Kraus (Czechoslovakia)
He started with Siła Trzyniec.  In 1951 he left the club and went to the university in Prague. He played for several clubs and from 1955 played for Dukla Prague. in 1956, Kraus joined Sparta Prague where he played for another 10 years, serving as the team captain for 4 years.  Tadeusz Kraus played for Czechoslovakia national team (scoring 6 goals in 23 matches) and was a participant at the two World Cups, 1954 FIFA World Cup and 1958 FIFA World Cup.

FW: Laszlo Kubala (Hungry, Spain, Czechoslovakia)
Born in Hungary of a multi-cultural background, Laszlo Kubala  was known as one of the greatest Barcelona players ever.  He still managed to win 4 Li Liga titles in the 1950's in an era dominated by Real Madrid.  In 1961, Barcelona eliminated Real Madrid from the European Cup, the first ever loss by Real Madrid at the tournament. He was capped by Hungry, Spain and Czechoslovakia. He was a guest player for Catalonia national football team.
FW: Lukas Podolski (Germany)
Born in Poland, Lukas Podolski grew up in Germany.  He made 81 appearances for Koln before moving to Bayern Munich. With Bayern, Podolski won the Bundesliga and DFB-Pokal double in 2008. Podolski returned to 1. FC Köln in 2009. He later played for Arsenal, Inter Milan, Galatasaray and Kobe Vissel. He was capped over 120 times.  He is a regular member of the national team from 2003 to 2016.  He was a part of the team that won the World Cup in 2014.

ST: Hernán Crespo (Argentina)
Started with River Plate, he went on to play for many big clubs in both Italy and England.  He won three Serie A scudetti, a Copa Libertadores, a Premier League title and an Olympic Games silver medal. At international level, Crespo's career was limited by playing with Gabriel Batistuta, but he still managed to score 35 goals and is Argentina's third highest goalscorer. He played in three FIFA World Cups: 1998, 2002, 2006.

ST: Miroslav Klose (Germany)
Klose is best known for his performances with the German national team. He was part of the German squad that won the 2014 World Cup.  He is the top goalscorer in the history of the World Cup, having scored 16 goals(2002, 2006, 2010 and 2014). Klose is also the top scorer of all time for Germany. He spent most of his career playing in Germany fpr Kaiserslautern, Werder Bremen and Bayern Munich, but played for Lazio in Italy at the end of his career.
Honorable Mention:

Squad Explanation
-- The selection is not based upon ethnicity. I am including Polish-born players who are not of Polish ethnicity.
-- Of course, I do not know the family tree of every footballers in the world.  Some are well-known about their Polish roots.  I would not have known about Peter Schmeichel, Hernan Crespo and Filipe Luis without further research.  I probably did not know about a lot of players who does not own a Polish sounding name.
-- Liked most of my blog team, I am using the "one drop rule".  Of course, I sometimes ignored someone with a distant blood link.
-- Poles in Germany are the second largest Polish diaspora (Polonia) in the world and the biggest in Europe. It is estimated between 2 million to about 3 million people living in Germany that might be of Polish descent.
-- Miroslav Klose was born in Poland, but his family was ethnic German. His father Josef was a professional footballer capped by Poland.  He returned to Germany as an Aussiedler.
-- Lukas Podolski (Germany) sometime played alongside Miroslav Klose for Germany.  He was born in Poland. He considered playing for Poland.
-- I have question mark regarding Pierre Littibarski's Polish roots.  I selected him based upon his Polish sounding name.
-- Ernst Wilimowski is excluded because he has played for Poland. The political situation at the time of his birth and career is also too sensitive and complex for many people.  In fact, I avoided selecting players who had similar historical role as Wilimowski.
-- Dariusz Wosz was born in Poland.  He moved to East Germany, where he began his football career.
-- The other German Poles on this team included Piotr Trochowski, Jurgen Grabowski, Horst Szymaniak, Tim Borowski and Lukas Sinkiewicz.  I probably could create an All-German Pole team just liked I did with German Turks.  At the time of writing, I do not have enough players.
-- Peter Schmeichel's father is Polish.  He held Polish citizenship until 1970.  That made Kasper Schmeichel a Polish too.
-- The middle name of Philip Jagielka is Nikodem.
-- Jean Djokseff was born to a Kalmyk father and Polish mother.
-- Leftback Filipe Luís's surname is Kasmirski.
-- About one million people of Polish descent live in France. It has one of the largest Polish overseas population in the world.
-- Raymond Kopa's Polish root is well-known. His grandparents were originally from Kraków and migrated to Germany, where his parents were born. They then migrated to France after the First World War. At the age of 14 he followed in the footsteps of his grandfather, father and brother by working in the coal mines of Nœux-les-Mines. His original surname was Kopaszewsk, but was shortened to Kopa whilst he was at school.
-- Raymond Kopa and Théodore Szkudlapski were teammates at Stade Rennes. Théodore Szkudlapski was better know as Theo.
-- Laurent Koscielny's grandfather and his great-grandfather were Polish miners who worked in the North of France.
-- Laszlo Kubala had Polish, Slovak and Hungarian roots.
-- One of Hernan Crespo's nickname was ‘El Polaco’ or the "Pole".  His grandmother  is from Poland. 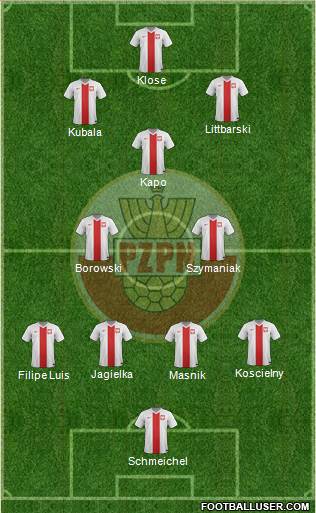