Czechoslovakia had two runner-up finishes in World Cups, in 1934 and 1962, and won the European Championship in the 1976 tournament before breaking into the Czech Republic and Slovakia in 1993. Czech Republic immediatelyfound successes by finishing second at Euro 1996.

This is the all-time team for the Czech Republic. If there were an All-Time World Cup, this would be the 23 players I would bring to the tournament.

Team
GK: Frantisek Planicka
Frantisek Planicka was considered one of the greatest of his generation.  He went to play in two World Cup Finals in 1934 and 1938, where he finished second in 1934.  He was their captain.  He played all his career for Slavia Prague, during which time the club won the Czech league eight times and the Mitropa Cup once.

GK: Petr Cech
Petr Cech is best remembered for being Chelsea's undisputred starting keeper from 2004 to 2014.  He won almost everything in club football.  He is considered among the greatest of his era.  He also played for Sparta Prague, Rennes and Arsenal. For Czech Republic, he is the most capped player in the history of the Czech team, with 124 caps, and represented the country at the 2006 World Cup, as well as the 2004, 2008, 2012, and 2016 European Championships.

RB/RW/CB/LB: Zdeněk Grygera
Known for his all round abilities, Zdeněk Grygera played with Petra Drnovice and Sparta Prague at home before heading to play in Netherlands with Ajax in 2003. In 2007, he moved to Juventus. After highly successful years in Turin, he moved to play for Fulham in 2011.  At the international level, Grygera played for the Czech Republic at UEFA Euro 2004, the 2006 FIFA World Cup and UEFA Euro 2008.  He was capped 65 times between 2001 and 2009.
CB: Jaroslav Burgr
Jaroslav Burgr was a participant in two World Cup Finals, in 1934 and 1938. He played 57 matches for the national team between 1929 and 1938, while captaining the national team on several occasions.  He also played for Bohemia under the German occupation. He played domestic club football mostly for AC Sparta Prague, where he collected 7 league titles. He played for SK Most.

CB: Antonín Hojer
Antonín Hojer played for Sparta Prague at home.  He was a member of the so-called "Iron Sparta", the famous Sparta Prague team from the first half of the 20th century.  For Czechosloslovaka, he earned 35 caps and scored 3 goals. Hojer represented Czechoslovakia at the 1920 Olympics and 1924 Olympics. His younger brother František was also a Czechoslovak footballer.

During his career, Miroslav Kadlec played for four Czech clubs, and also had an eight-year stint with Bundesliga's 1. FC Kaiserslautern, where he was crowned league champion in 1991 and 1998. At the international level, he was capped 64 times for Czechoslovakia and later the Czech Republic. He took part in the 1990 FIFA World Cup and the 1996 European Championship, where his team finished second behind Germany.

CB: Tomas Ujfalusi
Tomas Ujfalusi played 78 times for the Czech Republic, representing the nation at the 2006 World Cup and two European Championships.  He was a key player for the 2000s Golden Generation.   He played for Hamburg, Atlético Madrid, Galatasaray, Sigma Olomouc and Sparta Prague. He won the Europa League in 2010 with Atletico Madrid.

LB:  Marek Jankulovski
Marek Jankulovski's most notable achievements include winning the UEFA Champions League with A.C. Milan and being voted the 2007 Czech Footballer of the Year. He earned 77 caps for the Czech Republic, and represented them at three European Championships, the 2000 Olympics and the 2006 World Cup.

LB: Ladislav Novak
Ladislav Novak played 75 matches for Czechoslovakia, 71 of them as its team captain.  He went to three World Cup Finals: 1954, 1958 and 1962, where Czechoslavia finished second in 1962.  At the club level, Novák played mainly for Dukla Prague and won 8 championship titles with them.  He also played for FK Jablonec at the end of his career.

CM:  Josef Masopust
Josef Masopust  is regarded as the greatest player coming from Czechoslovakia. He led the Czechoslovakia team that reached the 1962 FIFA World Cup final, losing to Brazil.   In Europe, he took Czechoslovakia to third place at the 1960 UEFA European Football Championship.  He was capped 63 times. He was named European Footballer of the Year in 1962. For domestic football, Masopust won eight league championships and three national cups with Dukla.


CM: Svatopluk Pluskal
Svatopluk Pluskal was capped 58 times.  He played in three World Cup Finals from 1954, 1958 and 1962.  In 1962, he formed a partnership in the midfield with Josef Masopust and led his country to second place at the World Cup Finaks behind Garrincha's  Brazil. The best years of his club career were spent at Dukla Prague, the army club, where he played for almost 16 years.

RW: Karel Poborský
Karel Poborský is the all-time leader in appearances for the Czech national team, with 118 between 1994 and 2006. He also played in three European Championships, being named in the Team of the Tournament at Euro 96 after helping the Czechs to reach the final.  His most famous career in club football were spent with Manchester United and Benfica.  He also played with Lazio, České Budějovice, FK Viktoria Žižkov and SK Slavia Prague.


LW/AM: Pavel Nedved
Pavel Nedved was probably the best player from the region after the breakup of Czechoslovakia.  He was a key player as the Czech Republic finished second at Euro 1996, and reached the semi-final at Euro 2004.  At Lazio, he won the Scudetti in 1999-2000, only the second league title in Lazio's history.  With Juventus, he led the team to the Final of the Champions' League final in 2013, but he sat out ofthe game due to suspension.  He won the European Footballer of the that year.
AM: Tomas Rosicky

Tomas Rosicky was the star playmaker for the Czech Republic throughout the 2000s.  He has taken part in four UEFA European Championships as well as the 2006 FIFA World Cup. He was Czech Footballer of the Year in 2001, 2002 and 2006.  He started his career with Sparta Prague, and he had notable stints with Borussia Dortmund and Arsenal.

AM: Antonin Panenka
Antonin Panenka played most of his career for Bohemians Prague. Panenka won the 1976 European Championship with Czechoslovakia. In the final against West Germany he scored the winning penalty in the shootout with a softly chipped ball up the middle as the goalie dived away; this style of penalty is called the "Panenka penalty". In 1980, he won Czechoslovak Footballer of the Year and his team finished third at Euro 1980.


AM/FW: Oldrich Nejedly
Oldrich Nejedly spent his entire career at Sparta Prague as an inside-forward and he is considered one of Czechoslovakia's greatest players. He was top goalscorer of the 1934 World Cup.  He was awarded the Bronze Ball in the 1934 World Cup as the third most outstanding player of the tournament and was voted into the All Star Team of the tournament.

ST/RW: Zdeněk Nehoda
Zdeněk Nehoda was Czechoslovak Footballer of the Year Winner: 1978, 1979.  He earned 92 caps between 1971 and 1987.  He was a part of the Golden Generation that won the European Championshop in 1976 and finished 3rd in the European Championship of 1980.  At club football level, he played for Dukla Prague. In 1982, he headed to play club football in the West where he played in West Germany, France and Belgium.

ST: Milan Baroš
At home, Milan Baroš  played for Baník Ostrava before joining Liverpool in 2002.  He was a part of the team that won the 2005 Champions League. He later played for Lyon, Aston Villa, Portsmouth, Galatasaray, etc.  He earned 90 caps and was a key player for Czech Republic's Golden Generation in 2000's.  He was the top scorer at UEFA Euro 2004.

ST: Antonin Puc
Antonin Puc  played 61 matches for Czechoslovakia, scoring 35 goals. He played for Czechoslovakia in the 1934 FIFA World Cup scoring two goals, including one in the final, a 2-1 loss against Italy, and also played in the 1938 edition. He spent most of his club career with Slavia Prague. He is the all-time leading scorer for the Czechoslovak national team.

ST: Jan Koller
Jan Koller is best remembered for being the huge striker playing for the Czech Republic and Borussia Dortmund in the 2000s.  He began his career at Sparta Prague, then moved to Belgium with Lokeren and Anderlecht.  Between 2001 and 2006, he played for Borussia Dortmund. He also played for Monaco.  At the international level, he is the all-time leading goal scorer for the Czech Republic, with 55 goals in 91 appearances. He played in 2006 World Cup Finals and two other European Championship.

Squad Explanation
-- For players who were capped by Czechoslovakia, I only selected ethnic Czech players.  I am opened to all players who were capped by Czech Republic.
-- Czechoslovakia had many Golden teams.  They have won a European Championship in 1976 and finished second at Euro 1996,  and the 1934 and 1962 World Cup Finals. They have a record that is much better than most countries in the world.  My squad is a mixture of all of those great teams.
-- Oldřich Nejedlý, Frantisek Planicka, Antonin Puc and Jaroslav Burgr also played in the 1934 World Cup Finals, where Czechoslovakia placed second.
--  The modern generation has more exposure than the previous generation.  They played in the bigger European leagues. They earned better name recoginzation. Pavel Nedved, Petr Cech, Tomas Ujfalus, Marek Jankulovski, Jan Koller, Karel Poborský, Tomas Rosicky, Zdeněk Grygera and Milan Baros are all household names.  However, I only selected two members of the Czech Republic's tam that finished second at Euro 1996.  They are Nedved and Karel Poborský.
-- The three keepers are almost automatic selection.  Petr Cech is probably the greatest ever from the region. Ivo Viktor placed third in the 1976 Ballon d'Or.  Frantisek Planicka is very well-known in the Pre-War generations.
-- Koloman Gögh was born in modern day Czech Republic. According to various source, he was identified as a Hungarian minority in Slovakia or a Slovakian. He began playing football in Kolárovo (Slovakia), where it is 80% Hungarian.  His career was associated with ŠK Slovan Bratislava in Slovakia. So I put him on on the all-time team for Slovakia. On my all-time team for Czechoslovakia, I put Marek Jankulovski ahead of him, but I do believe that it might be a mistake.  Anyway, Koloman Gögh is now on the Slovakia all-time team.
-- Josef Bican is an Austrian playing for Czechoslovakia when he played for Slavia Prague, a club located in the Czech Republic, but I do not think he should be included here.  He is already on my all-time teams for Austria and Czechoslovakia.
-- In 1962, Svatopluk Pluskal and Josef Masopust formed a midfield that led his country to second place in the World Cup Finals.
-- Antonin Panenka had a type of penalty named after him after he scored one of the greatest penalty in the Final of Euro 1976.
-- Pavel Nedved is probably the greatest player from the region.  He won the European Footballer of the in 2013.   If he won the Champions' League that year, he would become a bigger name in the history of the game. He could have been a bigger name if he played in a World Cup Finals during his prime.
-- Karel Poborský's career with Manchester United was limited by the emerge of David Beckham.  Patrik Berger actually had a better club career with Liverpool at the same time, but this team already had Neved playing on the left.  Berger only managed to be on honourable mention while I needed Poborský on the right.
-- Vladimír Šmicer seldom got mention on any all-time list for Czech Republic.  Svatopluk Pluskal, Josef Masopust Antonin Panenka and Tomas Rosicky are ahead of him.
-- Oldřich Nejedlý was the top goalscorer of the 1934 World Cup, where Czechoslovakia finished second behind Italy. He won the bronze ball as the third best player of the Finals, but he is largely forgotten outside of Czechoslovakia.
-- Jan Koller's size stood out on the field.  His partnership with the smaller Rosicky at both club and country was also interesting, I found.
-- Milan Baros won the Gold Boot at Euro 2004.
-- Tomáš Skuhravý was a star in the World Cup Finals in 1990, but his career was relatively quiet after the World Cup Finals. I chose other players who had a better career with the national team.  Milan Baros, Jan Koller Antonin Puc and Oldřich Nejedlý are ahead of him.

Formation
Czech can start in goal too. 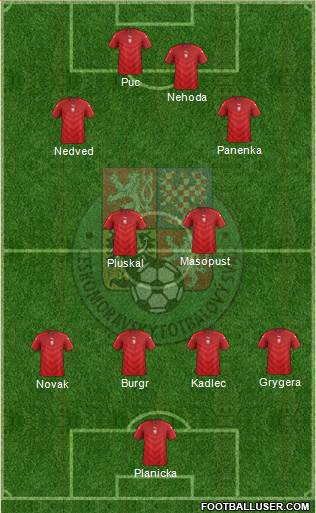