Central Asia stretches from the Caspian Sea in the west to China in the east and from Afghanistan in the south to Russia in the north. It is also colloquially referred to as "the stans" as the countries generally considered to be within the region all have names ending with the Persian suffix "-stan", meaning "land of". Central Asia is sometimes referred to as Turkestan.

Except Kazakhstan, all of them played in AFC.  Since 2002, Kazakhstan has been playing in the UEFA.

Team
GK: Yuri Pshenichnikov (Uzbekistan/USSR)
Born in Uzbekistan, Yuri Pshenichnikov played for FC Pakhtakor Tashkent from 1960 to 1967.  From 1968 to 1971, he played for CSKA Moscow.  He was the Soviet Goalkeeper of the Year in 1968. He earned 19 caps for the USSR national football team between 1966 and 1970.  He was the starting keeper at the UEFA Euro 1968, where the Soviets lost to the eventual winner Italy by a coin toss.


GK: Vladimir Lisitsin (Kazakhstan/USSR)
Lisitsin played twice for USSR.  He was blamed by Soviet coach Yevgeny Lyadin for the loss against East Germany in the 1964 Olympic Qualifier.  He was expelled from the team.  Forces club career, he played mainly with FC Kairat in Kazakhstan, but he also played for Dynamo Moscow and Sparktak Moscow.  He was born in Kazakhstan of Russian ethnicity.

GK: Ignatiy Nesterov (Uzbekistan)
Born in Uzbekistan of Russian ethnicity, Ignatiy Nesterov has played over 90 times for Uzbekistan.  He represented them in four editions of Asian Cup: 2004, 2007, 2011 and 2015. Before signing for Pakhtakor in 2002, Nesterov played for FK Samarqand-Dinamo.  He joined Bunyodkor in 2009 and then, now with Lokomotiv Tashkent.  With Pakhtakor and Bunyodkor, he won 10 Uzbek league titles in 11 seasons and 8 of those seasons with winning the Double.

RB: Samat Smakov (Kazakhstan)
Samat Smakov is Kazakhstan's all-time appearance record leader with 76 caps between 2000 and 2016. He was Kazakhstan FF "Best Player of the year" in 2004 and 2008. He played for many clubs in Kazakhstan.  He held FC Aktobe's club record for most Premier League appearances, before being surpassed by Yuri Logvinenko.  He also had a lengthy career with FC Kairat Almaty.  Outside of Kazakhstan, he played two seasons with FC Rostov in Russian Premier League.
CB: Evgeni Yarovenko (Kazakhstan/USSR)
Evgeni Yarovenko was born in Kazakhstan, Soviet Union as an ethnic Ukrainian.  He was a member of the Soviet Olympic team that won the Gold medal in 1988 Summer Olympics held in Seoul.  He also played twice for the senior national team in 1987. He started with Almaty club FC Kairat in Kazakhstan, where he played from 1983 to 1988.  Then he joined FC Dnipro Dnipropetrovsk and FC Rotor Volgograd. After the breakup of the Soviet Union, he played for many clubs in Russia, Ukraine and Finland.
CB: Valeri Glushakov (Kazakhstan/USSR)
Born in Kazakhstan under the Soviet Union, Valeri Glushakov was capped at under-21 level by the Soviet Union. In 1977, he made his debut with Spartak Moscow. He moved to Pakhtakor Tashkent FK before joining CSKA Moscow in 1980,  where he would play for them in three different stints. He played in Finland briefly after the breakup the Soviet Union.
CB: Oleg Pashinin (Uzbekistan)
Pashinin played for FC Lokomotiv Moscow from 1992 to 2007 winning two Russian league titles. In 2001, he was sent on a loan to play for Sanfrecce Hiroshima for a half season in the J-League, which was then coached by Russian coach Valery Nepomnyashchy.  He helped the club to reach 3rd place at the second stage of the J-League. He was capped by Uzbekistan 12 times.

SW: Oleksiy Cherednyk (Tajikistan/USSR)
Born in Tajikistan of Ukrainian ethnicity while under the Soviet Union, Oleksiy Cherednyk represented the senior national team of the Soviet Union twice in 1989.  He made his debut against Bulgaria in 1989. He also won the Olympic Gold medal in 1988. At the club level, he played with Pamir Dushanbe and FC Dnipro in the Soviet Union, winning a Soviet league title in 1988.  From 1990-1993, he played with Southampton in England.  He returned to play in Ukraine in 1994 at the end of his career.
LB: Sergei Mandreko (Tajikistan/CIS)
Between 1990-1992,  he played for the Pamir Dushanbe, completing in the last two championships of the USSR (1990, 1991) and then in the championship of Tajikistan. In the summer of 1992, he moved Austrian Rapid Wien club in Austria, where he played until 1997. He also played with "Hertha Berlin and Bochum. Internationally,  he capped at senior level by CIS four times. He later also played for both Russia and Tajikistan.

LB: Vitaliy Denisov (Uzbekistan)
He is the son of Gennadi Denisov. In 2007-2013 he played for Dnipro Dnipropetrovsk in Ukrainian Premier League. In 2013, he joined Lokomotiv Moscow, where he is still playing at the time of writing.  He was the Uzbekistan Player of the Year in 2013.  He was voted Best left-back of Russian Football Premier League in 2014.  He is capped 73 times for Uzbekistan.

CM: Mirjalol Qosimov (Uzbekistan)
Qosimov's club career was associated with Pakhtakor and Alania Vladikavkaz in Russia. He was the first Uzbekistani and the second Asian player to have scored in UEFA competitions. In 1995, he scored for Alania against Liverpool in the UEFA Cup. He was capped by the Soviet Union at the youth level.  From 1992 to 2005, he was capped 67 times for Uzbekistan winning the Gold Medal at the 1994 Asian Games.  He was Uzbekistan Player of the Year: in 1993, 1998, 2001 and 2004.
CM: Valeri Broshin (Turkmenistan/USSR)
During his career Valeri Broshin played for clubs such as FC Zenit Saint Petersburg and PFC CSKA Moscow. He earned 3 caps for the Soviet Union between 1987 and 1990, and participated in the 1990 FIFA World Cup finals. After the end of the Soviet Union, he received Turkmenistan citizenship in order to be eligible to play on the Turkmenistan national football team.  He earned 11 caps between 1997 and 1998.

CM: Odil Ahmedov (Uzbekistan)
At time of writing, Odil Ahmedov has over 80 caps and led Uzbekistan to the semifinal of the 2010 Asian Cup.  From 2006 to 2010, Odil Ahmedov played for Pakhtakor at home.  After his stunning performance at the Asian Cup in 2010, he joined Anzhi Makhachkala in the Russian league, where he was their player of the year in 2011 ahead of teammate Samuel Eto'o and Yuri Zhirkov. He moved to FC Krasnodar before going to Shanghai SPIG in 2016.
CM: Valery Kechinov (Uzbekistan/Russia)
Kechinov was born in Uzbekistan and started his professional career at local Pakhtakor in 1992, with whom he won the Uzbek League title, before moving to Spartak Moscow. Kechinov won six Russian Premier League titles and one Cup. He then played for Saturn and Shinnik. He was Uzbekistan Footballer of the Year in 1992. Capped twice by Uzbekistan in 1992, but later switched to play for Russia.

LW: Vassilis Hatzipanagis (Uzbekistan/Greece)
Born in Uzebekistan, USSR of Greek refugee parents, Vassilis Hatzipanagis played for the Soviet Olympic team.  He was highly rated in the Soviet Union. He returned to Greece in 1976, where he played for Greece in one single friendly march.  He was ineligible to play for Greece due to his selection to the Soviet youth team.  However, he was considered to be Greece's greatest player and was elected as Greece's UEFA Jubilee Player. In his club career, he played for Pakhtakor(USSR) and Iraklis.

AM: Server Djeparov (Uzbekistan)
Server Djeparov won the Asian Footballer of the Year twice in 2008 and 2011.  Since 2002, he played over a 100 times for Uzbekistan. He was the captain of the team that reached the semifinal of the 2011 Asian Cup.  From 2001 to 2007, he played for Pakhtakor before moving abroad.  He has played for FC Seoul and Seongnam FC in South Korea as well as clubs in Saudi Arabia, Iran and Kazakstan.  Server Djeparov is of Crimean Tatar and Russian descent and speaks fluent Russian.
FW: Alexander Tarkhanov (Kazakhstan/USSR)
Born in Kazakhstan, he played for SKA-Khabarovsk while he was in the Soviet Army.  He moved to CSKA Moscow, where he played for 9 seasons and served as their captain for 4 years. From 1976 to 1983, he was capped 6 times for the Soviets.  He made his debut in 1976 against Argentina. He played in a 1982 FIFA World Cup qualifier, but was not selected for the final tournament squad.

ST: Berador Abduraimov (Uzbekistan/USSR)
Berador Abduraimov is regarded as one of the best strikers and greatest football players in the history of Uzbek football. He started his career in 1960 with Pakhtakor in the Soviet Top League. In 1962, when he was only 19, Abduraimov became the Soviet Top League top goalscorer with 22 goals and Pakhtakor finished 6th the season in the league.  In the same year he became Merited Master of Sport. He also played for Spartak Moscow, CSKA Moscow and Meliorator Yangiyer.  He played for the USSR at the youth level.

ST: Gennadi Krasnitsky (Uzbekistan/USSR)
Gennadi Krasnitsky was born in Tashkent, Uzbekistan during the Soviet Union.  He played for his home town club Pakhtakor Tashkent, where he spent his entire career from 1960 to 1970. He became the first Uzbekistani player to score 100 goals in Soviet Top League to enter the Grigory Fedotov club. The club of top-scoring footballers in Uzbekistan is named after him - Gennadi Krasnitsky club, was founded in 2010. He was capped 3 times in 1961 for the Soviet Union.
ST: Vladimir Fyodorov (Uzbekistan/USSR)
Born in Uzbekistan, he played for them between 1972 and 1979, making his debut as a teenager in 1972. He was one of the FC Pakhtakor Tashkent players killed in the 1979 Dniprodzerzhynsk mid-air collision. He was only 23 years old.  For the national team, he played 18 times for the Soviet Union. He won a bronze medal at the 1976 Olympic Games in Montreal.

RW/ST: Sergey Kvochkin (Kazakhstan/USSR)
Sergey Kvochkin was selected as the best Kazakhstani footballer in the UEFA Jubilee Awards.  He spent his entire career with FC Kairat, where he played 232 matches in the Soviet league. In 1962, Kvochkin as a member of the USSR national team went on tour in Latin America, during which he managed to score the winning goal of the Brazilian Olympic team at the legendary stadium Maracana. 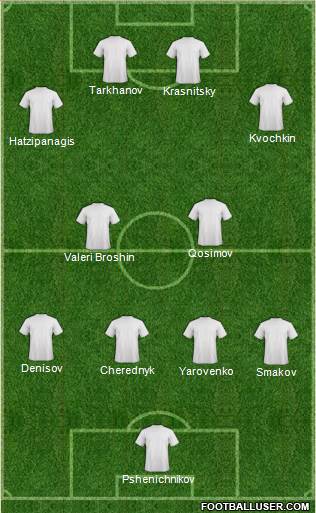