Ever since Johan Cruyff and Johan Neeskens joined Ajax in the early 1970's, a large number of Dutch players had played for Barcelona.  Ronald Koeman scored the winning goal in the 1992 European Cup Final under manager Johan Cruyff. Later, Louis Van Gaal brought a large contingent of Dutch players between 1997 to 2000 when he was the manager.

Team
GK: Ruud Hesp
Ruud Hesp first got his opportunity with Fortuna Sittard fro 1987 and 1994. He then playd for Roda from 1994 to 1997.  However, it was at Barcelona, where he enjoyed the best part of his career. He was their surprise starter over Victor Baia while playing Louis Van Gaal.  He travelled with the Dutch national team to Euro 1996 and the World Cup 1998, but he never earned a single cap for Holland.
RB: Michael Reiziger
Michael Reiziger was a member of the Golden Generation from Ajax that won Champions League in 1995.  After a brief stint with AC Milan, he moved to Barcelona in 1997.  In 2004, Reiziger moved to Middlesbrough on a Bosman transfer. He was capped 70 times for Netherlands, representing the nation in three European Championships and the 1998 World Cup Finals.

CB/LB: Frank De Boer
At one point, Frank De Boer was Netherlands most capped player. He was a part of Ajax's Champions' League winning team in 1995.  He was an important player in the late 1990's. He captained the Oranje to the semi-finals of both the 1998 FIFA World Cup and UEFA Euro 2000.  He also played with Barcelona for 6 years. His twin brother Ronald also played with him for Oranje.

CB:  Ronald Koeman
Ronald Koeman was the rock solid sweeper of Netherlands' Euro1988 team.  He was capped 78 times. He also won two European Cups, one each for PSV Eindhoven and Barcelona FC.  He scored the winning goal for Barcelona's victory in 1992. The Cup was Barcelona FC's first ever European Cup.  In Netherlands  he played for all of the "big three" clubs, namely Ajax, PSV Eindhoven and Feyenoord.

LB/DM:  Giovanni Van Bronckhorst
Giovanni Van Bronckhorst played for Netherlands in three World Cups, in 1998, 2006 and 2010, as well as three European Championships, in 2000, 2004 and 2008.  He was the captain of Netherlands at World Cup 2010, where Holland finished second.  He played 106 times for Holland.  He also played with Feyenoord, Barcelona Arsenal and Rangers.
CM: Edgar Davids
Nicknamed "the Pitbull", Edgar Davids was one of the greatest defensive midfielders in the world.  He won the European Champions' League with Ajax in 1995.  He was capped 74 times. He was an important player at the World Cup Finals in 1998 when Netherlands reached the semi-final. At the club level, he also spent 7 seasons with Juventus at the height of his career.  He also played for Tottenham Hotspurs, Barcelona, AC Milan, etc.

CM: Johan Neeskens
Johan Neeskens was considered to be one of the greatest Dutch midfielders. He had 49 caps for Netherlands.  Her led Netherlands to two second place finishes at the World Cup Finals in 1974 and 1978.  He was Holland's top scorer at the 1974 World Cup Finals.  He also won three straight European Cups with Ajax: 1971, 1972, 1973. He also played with Barcelona FC and New York Cosmos.

CM: Phillip Cocu
Cocu played for AZ and Vitesse Arnhem before joining PSV Eindhoven. He played for FC Barcelona between 1998 and 2004. During Cocu’s second stint at PSV, he won another three Eredivisie titles and reached the Champions League semi-finals. With 101 caps, Cocu is fifth on the list of most Dutch international appearances.  He also played at the 1998 and 2006 World Cup, as well as the 1996, 2000 and 2004 European Championships.

LW/RW: Marc Overmars
Known for his speed, Overmars was a member of the youthful Ajax team that won the European cup in 1995. He moved to Arsenal in 1997, where he starred playing under Arsene Wenger.  He won the Double in 1997-1998.  He later moved to Barcelona and Go Ahead Eagles. His career with Oranja lasted from 1993 to 2004, and was an important player.  He won the Best Young Player Award at USA 1994.
FW: Johan Cruyff
Johan Cruyff won the Ballon d'Or three times, in 1971, 1973 and 1974.  He was considered one of the best players in history.  He was noted for his brilliant performance at the World Cup in 1974 and winning three straight European Cups with Ajax.  He moved to Barcelona in 1973 for a world record transfer fees.


ST: Patrick Kluivert
The teenage star of the great Ajax team of 1995.  He was also a star with Barcelona.  He joined Milan in 1997, but he quickly left for Barcelona a season later.  He had a relatively successes at the club, but left for Newcastle United in 2004.  His career was never the same due to injuries.  He was an important part of the national team from 1996 to 2004.  However, his career was shortened due to various issues.


Squad Explanation
-- I always believed that Barcelona has a strong connection to the Netherlands. According to Transfermarkt, there are 20 Dutchmen who had played for the club.  Barcelona has 20 Brazilians and 19 Frenchmen.  So statistically the numbers are not overwhelmingly great.  I put all 20 of them on honorable mention.
-- I selected three Dutch players on my Barcelona All-Time team.  They are Johan Cruyff, Johan Neeskens and Ronald Koeman.
-- Johan Cruyff and Johan Neeskens were the first two Dutchmen ever to join the club. They arrived in 1974.  Twenty-one years later, Ronald Koeman joined the club as the third Dutch player in their history.
-- Rinus Michels, Johan Cruyff, Frank Rijkaard and Lous Van Gaal have coached the club.
-- Under Johan Cruyff's management, Barcelona was known as the "Dream Team".  Ronald Koeman, Richard Witschge and Jordi Cruyff were the only Dutchmen who played during that era.  Ronald Koeman scored the winning goal against Sampdoria at the 1992 European Cup Final.
-- Jordi Cruyff played under his father.  He did well enough to earn to be on the Dutch national team.  He went to the 1996 European Championship.
-- Most of the other Dutch players played under manager Louis Van Gaal.  Frank and Ronald de Boer, Patrick Kluivert, Phillip Cocu, Boudewijn Zenden, Marc Overmars, Ruud Hesp, etc all played under him.
-- Jasper Cillessen might have better international reputation than Ruud Hesp. He was the starting goalkeeper for Netherlands during the World Cup Finals in 2014 while Hesp never played for Netherlands.  For Barcelona, Hesp played much more games than him.  He eventually replaced Vitor Baia in goal at Barcelona.
-- Frank De Boer spent 5 seasons with Barcelona, but his twin brother Ronald only stayed 18 months.
-- Edgar Davids only played half of a season in 2004 while on loan, but he was credited of turning Barcelona into a force in the mid-2000's.  His inclusion to the team turned the season around. Mark Van Bommel is the other alternative, but he only played half a season more than Davids.
-- Mark Van Bommel also had to complete against  Phillip Cocu and Johan Neeskens for a spot. Neeskens needed no introduction.  Phillip Cocu is the all-time appearance record holder for Dutch player over here.
-- Frenkie de Jong is the latest arrival to Barcelona.
-- Patrick Kluivert played 6 seasons here.  He scored over 120 goals for the club.
-- I wrote a blog about Dutch-German Rivalry between Real Madrid and Barcelona.  Around the same time when Johan Cruyff and Johan Neeskens played for Barcelona, Paul Breitner and Gunter Netzer played for Real Madrid.  Meanwhile, the national teams of West Germany and Netherlands played against each other in the Final of the 1974 World Cup Finals. 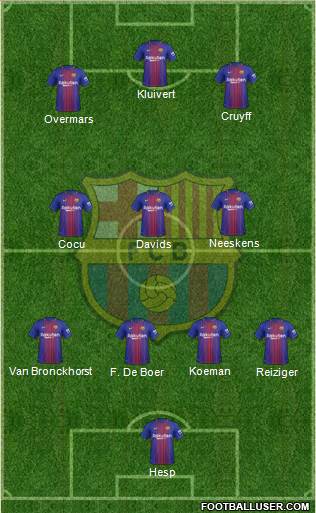