Castile is a vaguely defined historical region of Spain. There are different conceptions and definitions of Castile, and since it lacks modern day official recognition. It is mainly considered of Castile and Leon, Castile and La Mancha, Cantabria, La Rioja and Madrid.

This is my selection of all-time 23 member team for Castile without players from the Community of Madrid.  The all-time blog teams of Andalusia, Basque, Valenican, Community , Galicia and Catalonia were based on ethnicity, but this team is based on birth places. 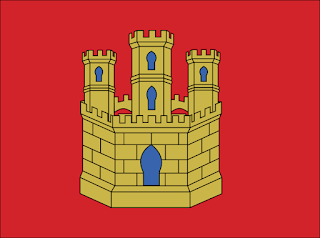 GK: José Manzanedo (Castile and Leon)
From 1963 to 1977, Jose Manzanedo played for Burgos. From 1977 to 1985, he played for Valencia CF.  He later played for Real Valladolid, Sabadell and Cultural y Deportiva Leonesa.  He played once for the Spanish national team in 1977 against Switzerland in 2-1 away loss.  He also represented Spain in the 1976 Olympics.

GK: Dani Aranzubia (La Rioja)
Dani Aranzubia is a product of Athletic Bilbao's famed youth academy at Lezama.  From 1996 to 2000, he played for them.  In 2008, Aranzubia joined Deportivo de La Coruña. In 2011,he become the first goalkeeper in La Liga history to score from open play.  He made his only appearance for Spain in 2004, in a friendly match with Andorra.  He was Spain third choice keeper at Euro 2004.

RB: Alvaro Arbeloa (Castile and Leon)
Alvaro Arbeloa started his career with Real Madrid, but he made a name with Liverpool in England before making a return to his mother club in 2009.  He helped Real Madrid to win their 10th European Cup in 2014.  For Spain, he was mainly used as a sub during Spain's glorious run at Euro 2008 and the World Cup in 2010, but he was their starting rightback at the 2012 European Championship.
RB: Feliciano Rivilla (Castile and Leon)
Feliciano Rivilla was an all-time great with Atletico Madrid.  He started playing football with Real Ávila CF, moving to Real Murcia at the age of 17.  In 1954, he joined Atletico Madrid, where he played until 1968. He won the European Championship in 1964 with Spain, and was a part of two WC Finals in 1962 and 1966.

CB: Gregorio Benito (Castile and La Mancha)
Gregorio Benito started as a track and field star. He signed for Real Madrid in the 1963. After two years on loan to neighbouring Rayo Vallecano, he returned to his main club, remaining there for the following 14 seasons and winning six leagues and five Spanish Cups.  He was capped 22 times by Spain.

CB: Marquitos (Cantabria)
Marquitos was a member of Di Stefano's Real Madrid in the 1950's, a team widely considered to be the greatest club side.  They won five straight European Cup titles.  He scored a goal against Stade Reims at the 1956 Final. He also played for Racing de Santander, Hércules CF, Real Murcia, Calvo Sotelo and Toluca de Santander. Capped twice.

CB: Iván Helguera (Cantabria)
Helguera started in the lower division in Spain before joining Roma in 1997.  He then joined Espanyol and made a name there.  In 1999, he joined Real Madrid, where he won two Champions' League titles.  He left Real Madrid in 2007 and played one more season with Valencia.  He was capped 47 times.  He participated at Euro 2000 and 2004, and the 2002 World Cup Finals.

CB: Pablo Ibáñez (Castile and La Mancha)
Pablo began his career with Albacete, with whom he earned promotion from the Segunda División to La Liga in 2003. A year later, he signed for Atlético Madrid where he made nearly 200 appearances over six seasons.  In 2010 he moved to England where he played for West Bromwich Albion and Birmingham City.  He had 23 caps and represented his country at the 2006 World Cup.
LB: Isacio Calleja (Castile and Leon)
Except for a loan spell with CD Guadalajara in the third division, Isacio Calleja spent his entire 14-year professional career with Atlético Madrid. He won back-to-back Copa del rey from 1959 to 1961.  In 1962, he won the Cup Winners' Cup. He had 13 caps for Spain. Calleja helped the national side to win the 1964 European Nations' Cup on home soil.

LB: Pachín (Cantabria)
Pachín signed for Real Madrid in 1959 from Segunda División club CA Osasuna. Pachín left the Merengues in May 1968, having appeared in 218 competitive games and scored two goals. He won 11 major titles during his spell, including seven national championships and the 1960 and 1966 editions of the European Cup.  He earned 8 caps and played in the World Cup Finals in 1962.

CM: Ruben Baraja (Castile and Leon)
Baraja started his career with Real Valladolid and moved to Atletico Madrid.  Atletico Madrid relegated after the 1999-2000 season which allowed him to join Valencia and his career took off.  Forming a midfield with David Albelda, Valencia won two La Liga titles and the 2004 UEFA Cup.  He was also a part of the losing side at the Champions' league Final in 2001.  He earned 43 caps.  he played in WC 2002 and Euro 2004.
DM: Vicente del Bosque
Vicente del Bosque almost played his entire career with Real Madrid, except with some loan spells at the beginning of his career.  He won five league titles (1974–75, 1975–76, 1977–78, 1978–79, 1979–80) and four Copa del Rey titles.  He was a part of Spain's team at the European Championship in 1980.  He later became a successful manager.

AM/CM: Andres Iniesta (Castile and La Mancha)
Andreas Iniesta scored the World Cup winning goal in 2010 that gave Spain its first ever World Cup title. At Euro 2012, Iniesta led Spain to their second consecutive continental crown, again being chosen as the Man of the Match for the final against Italy, and was named the Player of the Tournament. He won over 130 caps for Spain. He also won Champion' league trophies with Barcelona.


CM/AM: Juan Mata (Castile and Leon)
Juan Mata was a youth academy player for Real Madrid, but he started with Valencia in 2007.  From 2011 to 2014, he played for Chelsea, where he was a major star for the team.  After a fallout with Jose Mourinho, he moved to Manchester United.  Ironically, they would reunite again at Old Trafford. For Spain, he was a part of the team that won the World Cup in 2010 and the European Championship two years later.

AM/CM: Luis del Sol (Castile and Leon)
Luis del Sol started his career with Real Betis.  He joined Real Madrid in 1960, winning an Intercontinental Cup in his first season with Real Madrid. In 1962, he was lured to play in Italy.  He later played with Juventus and then, Roma.  He was a part of Spain's Euro 1964 winning team. He also played in both 1962 and 1966 World Cup Finals.

RW: Marcos Alonso Peña (Cantabria)
Marcos Alonso made his La Liga debuts for Racing Club de Santander in 1977.  From 1979 ti 1982, he played for Atletico Madrid, where he made his name.  He then played for Barcelona between 1982 and 1987.  He earned 22 caps for Spain. He represented the nation at UEFA Euro 1984, being an unused squad member in an eventual runner-up finish.  His father was Marquitos, and his son was Marcos Alonso Mendoza.
FW/LW: José Amavisca (Cantabria)
José Amavisca played with Real Valladolid and UE Lleida before joining Real Madrid in 1994, where he formed a partnership with Iván Zamorano. He was Don Balón Award Spanish Player of the Year in 1995.  He later played for Racing de Santander and Deportivo la Coruna.  For Spain, he had 15 caps.  He was a part of the team that won the Gold medal at the 1992 Olympics.
LW: Francisco Gento (Cantabria)
Francisco Gento is regarded as one of the greatest left wings in history.  Gento began his career at Racing Santander in 1952 and moved to Real Madrid the following season. He appeared in a joint record eight European Cup finals, winning a record six, as well as winning 12 La Liga titles.  In a 14-year international career, Gento earned 43 caps for Spain, playing at the World Cup in 1962 and 1966.

ST: Mariano Martín (Castile and Leon)
Martín joined FC Barcelona in 1939, proceeding to become one of the club's most prolific scorers. During his nine seasons at the Camp Nou, he netted 128 times in only 150 matches, including 30 in 23 contests in his fourth season, although Barça finished in third place. Martín closed out his career in 1952, after playing for Gimnàstic de Tarragona, Real Zaragoza and UE Sant Andreu.  For Spain, he was capped 3 times.

ST: Chus Pereda (Castile and Leon)
Chus Pereda began his career with Bilbao club SD Indautxu, but was rejected by Athletic Bilbao because of his birthplace. He then joined Real Madrid.  He was better known for his career with Barcelona, where he played from 1961 to 1969.   He earned 15 caps. In 1964 he helped Spain win the European Championship,

ST/FW: Cesar Rodriguez (Castile and Leon)
During his career, Cesar played mainly for Barcelona, appearing in 351 official matches and scoring 232 goals, making him the highest goalscorer in the club's history until he was passed by Lionel Messi.  He won the Pichichi Trophy for the 1948–49 season. He won five La Liga championships with the team in a total of 13 major trophies.  At the international level, César had 12 caps. He represented Spain at the 1950 World Cup. 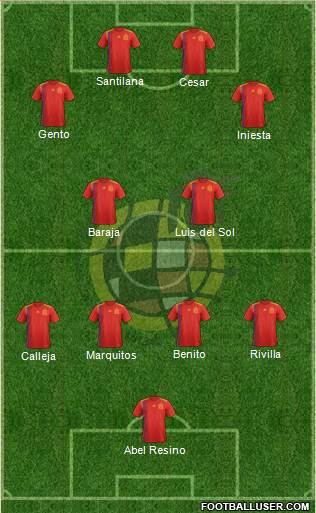