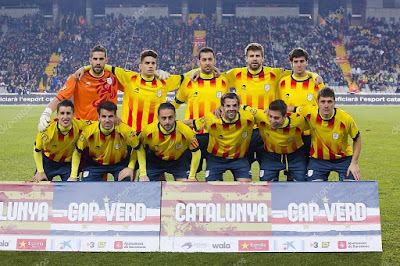 Catalonia is is an autonomous community of Spain, designated as a nationality by its Statute of Autonomy.  Most of the territory (except the Val d'Aran), lies on the northeast of the Iberian Peninsula, to the south of the Pyrenees mountain range. Catalonia consists of four provinces: Barcelona, Girona, Lleida, and Tarragona. The capital and largest city, Barcelona is the second-most populated municipality in Spain and the fifth-most populous urban area in the European Union.
The Catalonia national football team (Catalan: Selecció de futbol de Catalunya) is the official football team of Catalonia. It is organised by the Catalan Football Federation, founded in 1900. The team has been referred to by various names including Selecció Catalana, Selecció de Barcelona and the Catalan XI. Catalonia is not affiliated with either FIFA or UEFA and is therefore not allowed to participate in either the FIFA World Cup or the European Championship. Other than in certain cases where other nationalities are involved, Catalan players are full Spanish citizens who are eligible to play for Spain.  Catalonia is known for its club football teams Barcelona and Espanyol.
This is my selection of an all-time 23 member team for Catalan players. I excluded guest players who played for Catalan XI, but I included players from Catalan diaspora.

Team
GK: Ricardo Zamora (Spain)
The first ever star goalkeeper in history.  He is also remembered for a spectacular last minute save he made in the 1936 Copa de España final while playing for Real Madrid against FC Barcelona. The award for the best goalkeeper in La Liga, the Ricardo Zamora Trophy, is named in his honour and he was voted one of the greatest players of the 20th century by World Soccer magazine. He was also Spain's most capped player for 45 years.

GK: Antoni Ramallets (Spain)
Antoni Ramallets was the starting keepers of Barcelona in the 1950's.  He played alongside with Laszio Kubalal and Luis Suarez.  He won 6 La liga titles in an era that was known to be dominated by Alfred Di Stefano's Real Madrid.  Ramallets played 35 games for Spain during 11 years, making his debut against Chile on 29 June 1950, during the 1950 FIFA World Cup in Brazil.

GK: Hugo Lloris (France)
Hugo Lloris started his career with Nice.  He moved to Lyon in 2008 to replace Coupet. In 2012, he moved to Tottenham Hotspurs.  Tay the time of writing, he has over 80 caps for France.  He is a key player since the World Cup Finals in 2010, participating in every major tournaments.  He was the starting keeper for France at the Euro 2016 and the World Cup Finals in 2018.
RB: Albert Ferrer (Spain)
Ferrer represented the nation in two World Cups and at the 1992 Olympic Games, winning the latter tournament. He was a part of Barcelona's Dream Team in the 1990's. He won a Champions' League with Barcelona in 1992. After Louis van Gaal took over, Barcelona gradually signed more Dutch players and his places were uncertain.  He left for Chelsea.

CB: Carlos Puyol (Spain)
As an one-club man, Carlos Puyol served as the long-time team captain for his only club Barcelona after taking over from Luis Enrique in August 2004, and went on to appear in 593 official games for the club and win 20 major titles, including  three Champions League: 2005–06, 2008–09, 2010–11. He earned 100 caps for Spain, winning the World Cup in 2014 and the European Championship in 2008.
CB: Gerard Pique (Spain)
Pique started his career with Barcelona's academy, but left for Manchester Uniued. In England, he was seldom used by the team.  he returned to Spain in 2006 with Zaragoza.  He gradually became a good defender in La Liga.  At the time of writing, he has been capped over 90 times.  His grandfather, Amador Bernabeu, is a former vice-president of Barcelona.

CB: Joan Segarra (Spain)
Joan Segarra played for Barcelona from1949 to 1964.  He was a part of the great Barcelona team of the 1950's. He was the captain of the "Barça of the Five Trophies". They finally reached the 1961 European Cup Final, but losing to Benfica.  It would take Barcelona 31 more years before finally winning the Cup.  For the national team, he had 25 caps.

CB: Ferran Olivella (Spain)
Ferran Olivella was capped 18 times for Spain, but better remembered for being the captain of the Spanish national that won the European Championship in 1964. He was also an unused sub at the World Cup Finals in 1966. For club football, he played his entire career with Barcelona, winning the Inter-Cities Fairs Cup three times in the 1960's.

LB: Joan Capdevila (Spain)
At the club level, Joan Capedevila started his career with Espanyol in 1998.  He later played for Atletico Madrid, Deportivo la Coruna, Villarreal and Benfica.  The peak of his career was with Deportivo la Coruna and Villarreal. He was capped 60 times for Spain, in a period where Spain won the 2010 World Cup and the 2008 European Championship. He was their disputed starting leftback in that era. He was the only starting player in the 2010 Final who was not a member of Real Madrid or Barcelona.


LB: Jordi Alba (Spain)
Alba started his career at Barcelona, but was released after being deemed too small. After joining Cornellà, he moved to Valencia. In 2012 he returned to Barcelona. At the time of writing, he has over 70 caps and was a member of the team that won the Euro 2012. He attended the 2014 and 2018 World Cup Finals.

DM: Sergio Busquets (Spain)
Since 2009, Sergio Busquets had played over 100 times for Spain.  He was known for doing the "dirty work" in the midfield during Spain's glorious run at the World Cup in 2010.  For his club career, he played for Barcelona.  He is probably remembered for his racist against Marcelo during an El Classico game. His father was a goalkeeper who played for Barcelona FC.

DM: Pep Guardiola (Spain)
At the club level, Pep Guardiola won a Champions' League with Barcelona in 1992. It was Barcelona's first ever European Cup. He was their captain from 1997 to 2001.  He also played for Brescia and Roma in Italy, Al-Ahli in Qatar, and Dorados de Sinaloa in Mexico. He was capped 47 times for Spain, winning the Olympic Gold Medal in 1992, and later appeared at the 1994 World Cup and Euro 2000. He also played friendly matches for Catalonia.

CM: Mariano Gonzalvo (Spain)
Gozalvo was a member of Barcelona's team in the 1950's.  The team was known to be Spain's greatest club side before the emerge of Alfred Di Stefano's Real Madrid.  He won 5 league titles.  For the national team, he was capped 16 times.  Between 1947 and 1955 he also played three times for the Catalan XI. His first game was a 3-1 win against Spain on October 10, 1947.

AM: Josep Samitier (Spain)
Josep Samitier played for Barcelona between 1919 and 1932. He is the club's all time third top goalscorer.  He joined Real Madrid in 1932 from Barcelona FC and then played for Nice in France from 1936 to 1939.  In 1920, Samitier was also a member of the first ever Spanish national squad. The squad won the silver medal at the 1920 Olympic Games. He subsequently made 21 appearances and scored 2 goals for Spain.

AM./CM: Xavi (Spain)
Xavi was perhaps one of greatest playmakers of his generation.  He won everything in football.  Xavi has won 31 trophies, only surpassed by Andrés Iniesta as the most successful Spanish player in history.  For the national team, he had 133 caps and was a part of the team that won the  2010 World Cup and two European Championship in between.  He was named Euro 2008's player of the tournament. He was finished third at the Ballon d'Or in 2010 and 2011.
RW: Estanislau Basora (Spain)
Estanislau Basora was considered of the Barcelona's greatest players.  He was a member of Barcelona's team in the 1950's, the greatest Spanish club team before the emerge of Alfred Di Stefano's Real Madrid.   He was capped 22 times for Spain between 1949 and 1957. He went to the World Cup Final in 1950. He also represented Catalonia XI on several occasions.

RW: Carles Rexach (Spain)
From 1965 to 1980, Carlos Rexach played for Barcelona.  He won the Pichichi Trophy in 1971.  He also won the Cup Winners' Cup in 1979.  He was also known for his partnership with Johan Cruyff at Barcelona.  For the national team, he was capped 15 times. He went to the 1978 World Cup Finals in Argentina, but only appeared once in the Finals.

LW: Luis Garcia (Spain)
At the club level, Luis Garcia played for Barcelona and Atletico Madrid before moving to Liverpool in 2004. He won the 2005 Champions' League under Rafael Benitez after going down 3-0 at half time against AC Milan. It was marked as one of the greatest comeback in history.  He played in Greece and Mexico. He was capped 20 times for Spain between 2005 and 2008. He went to the 2006 World Cup Finals in Germany.

AM/SS: Cesc Fabregas (Spain)
Cesc Fabregas was lured to play for Arsenal's academy in 2003.  He made his first time debut as a teenager. he helped Arsenal to reach the Champions' league Final in 2005.  He retuned to Spain in 2011 with Barcelona, but returned to England in 2014 to play for Chelsea.  He was a part of Spain that won the World Cup in 2010 and two European Championships.

ST: Raul Tamudo (Spain)
Raul Tamudo was a club legend with Espanyol, where he played from 1997 to 2010.  He captained the side for a decade.  He won two Copa Del Rey with the club as well as reaching the Final of UEFA cup in 2007. He is their all-time leading scorer.  He also played for Real Sociedad, Rayo Vallecano Mexico's C.F. Pachuca and Sabedell FC. He picked up 13 caps for Spain between 2000 and 2007. He was a member of their 2000 silver medal winning team at the Olympics.


ST/LW: Eduard Manchón (Spain)
Between 1950 and 1957,  Eduard Manchón scored 88 goals in 201 games for Barcelona, where he witnessed one of his most successful periods in his career. Together with László Kubala, César and Estanislau Basora, he formed one of the most dangerous front-lines in the club's history. He belonged to the legendary "Five Cups-Barça" side, which won all five possible trophies in 1952.

ST:  Paulino Alcántara (the Philippines/Spain)
Born in the Philippines of a half-Spanish, half-Filipino, he made his debut for Barcelona at the age of 15 and remains the youngest player to play or score for the club. He also scored 100 goals in 69 matches, making him the club's highest goalscorer He was selected for the Philippine national football team in 1917 and represented his country at the Far Eastern Championship Games.  In 1921. he was selected to play for Spain.  he scored 6 goals in 5 games for Spain.

ST: Eric Cantona (France)
Before joining Leeds United in 1992, Eric Cantona was known as the bad boy of French football.  He moved to England to restart his career.  In England, he became a huge star.  He won the league title with Leeds United and moved to Manchester United.  At Manchester United, he became one of their best ever players. For the national team, he was a part of the ill-fated national team that failed to qualify for the World Cup in 1994. 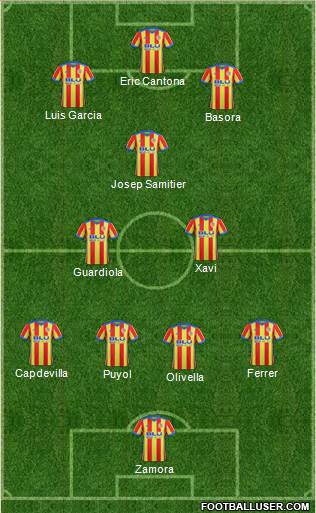