This is my selection of a 25 member all-time team for Manchester United under Sir Alex Ferguson.  The number 25 was chosen because it is the official squad size for the Champions' League.

Sir Alex Ferguson is the most decorated manager in English football's history. He spent 26 years with Manchester United.  From 1986 to 2013, he won 38 trophies, including 13 Premier League titles, five FA Cups and two UEFA Champions League titles.


The Team
GK: Peter Schmeichel (Denmark)
Peter Schmeichel was regarded as one of the greatest keeper of all-time. He was voted the "World's Best Goalkeeper" in 1992 and 1993. He had a successful career at Manchester United, whom he captained to the 1999 Champions League to complete the Treble.  He is also the most capped player for the Denmark national team, with 129 games between 1987 and 2001. In addition to Euro 92, he played for his country at the 1998 World Cup and three European Championship tournaments.
GK: Edwin Van Der Sar (Netherlands)
Edwin Van Der Sar is the most capped player in Holland's history.  He was best remembered for being the Ajax keeper in 1995 that won the Champions' League. He also played for Juventus, Fulham and then, later for Manchester United for 6 seasons.  He won the Champions' League in 2007-2008. In between, he also played with Fulham and Juventus.

GK: Fabien Barthez (France)
Fabien Barthez  is France's most decorated goalkeeper.  He had 87 caps for "Les Bleus".   He won the World Cup in 1998 at home and then, the European Championship two years later. He is France's most capped player in the FIFA World Cup, with 17 appearances at the finals. For domestic football, he played with Toulouse, Marseille, AS Monaco, Manchester United and Nantes.  He also won Champions League medal with Marseille in 1993.

RB: Gary Neville (England)
Along with his brother Philip, David Beckham, Paul Scoles, Ryan Giggs, and Nicky Butt, Gary Neville captained the Manchester United academy team that won the FA Youth Cup in 1991.  They all became fixtures for the senior team throughout the 1990's.  Gary Neville remained the team until 2011 and was the second, longest serving player.  For England, he was the most capped rightback in history.

CB: Rio Ferdinand (England)
Rio Ferdinand became the youngest defender to play for the Three Lions at the time in 1997.   He played 81 times for England  between 1997 and 2011, and was a member of three World Cup squads.  At one point, he was the most expensive British footballer and also broke the world's record transfer fees for a defender twice. He won the Champions' League with Manchester United in 2008. He also played for Leeds United and West Ham.

CB: Nemanja Vidic (Serbia)
Nemanja Vidic spent 9 seasons as the starting center-back at Manchester United from 2006 and 2014, where he won every major trophy and established himself as one of the best center-backs of his generation.  He also played for Red Star Belgrade and Spartak Moscow.  He went to the WC Finals in 2006 and 2010.

CB: Steve Bruce (England)
Steve Bruce played for Gillingham and Norwich before joining Manchester United in 1987, where he would play until 1996.  Under Sir Alex Ferguson, he won three Premier League titles, three FA Cups, one Football League Cup and the European Cup Winners' Cup.  He also became the first English player of the 20th century to captain a team to the Double. Despite his success with his club, he was never selected to play for England.
CB:  Jaap Stam  (Netherlands)
Stam became the most expensive Dutch player and the most expensive defender in the world when Manchester United bought him for 10.6 million pounds.  He also played for PSV Eindhoven, Manchester United, Lazio, AC Milan and Ajax. Sam was capped 67 times for Netherlands, scoring three goals. He was in their squads for three European Championships and the 1998 World Cup.

LB/RB: Denis Irwin (Ireland)
Alex Ferguson considered him his greatest ever signing.  He played over 200 games for Manchester United, winning the Champions' League in 1999 and 7 Premiership titles. He also played for Leeds United and Oldham Athletic, and finished his career with Wolverhampton Wanderers. Irwin was capped by the Republic of Ireland national side 56 times, scoring four goals and featuring in the side that reached the second round (last 16) at the 1994 FIFA World Cup.

LB: Patrice Evra (France)
Evra began his career with Nice and then, Monaco. He played for the Red Devils from 2006 to 2014, where he became one of the best left backs in the world.  At the time of writing, he earned 81 caps and was a key player for France since 2008.  He was the captain of the national team.  At South Africa 2010, he led a player revolt against Raymond Domenech.

CM: Michael Carrick (England)
Michael Carrick started his career with West Ham and Tottenham Hotspurs before moving to Manchester United in 2006.  At Old Trafford, he won every major trophy for club football, including the Champions' League Title in 2008.  At the international level, he played 34 times for England between 2001 and 2015. He went to the World Cup Finals in 2006 and 2010.


RW: David Beckham (England)
Beckham is the greatest ever icon to play the game. He started his career with Manchester United where he was a part of the famous team that won the 1992 FA Youth Cup. For the senior side, he won 6 Premiership titles and the 1999 Champions' League.  In 2003, he joined Real Madrid for the well-publicized "Galacticos" signing.  In 2007, he moved to LA Galaxy, where he kickstarted a soccer fever in the United States.  For England, he earned 115 caps and was a key part of the national team throughout his career.
LW: Ryan Giggs (Wales)
Giggs was Sir Alex's longest serving player at Manchester United, where he played from 1990 to 2014.  He also holds the club record for competitive appearances. During his time at United, he won 13 Premier League winner's medals, four FA Cup winner's medals, three League Cup winner's medals and two Champions League winner's medals. He is widely considered one of the greatest British wingers in modern history. He played 64 times for Wales.  He led Great Britain at the London Olypmpics in 2012.

AM/CM: Paul Scholas (England)
Scholas was a member of Manchester United's Class of 1992.  He spent 20 years with Manchester United's first team.  He won 11 Premier League, three FA Cup and two UEFA Champions League winners medals.  He earned 66 caps for England before he retired from the Three Lions in 2004. His cap total was limited because of playing the same generation with Frank Lampard and Steve Gerrard.

FW: Eric Cantona (France)
Before joining Leeds United in 1992, Cantona was known as the bad boy of French football.  He moved to England to restart his career.  In England, he became a huge star.  He won the league title with Leeds United and moved to Manchester United.  At Manchester United, he became one of their best ever players. For the national team, he was a part of the ill-fated national team that failed to qualify for the World Cup in 1994.

FW: Wayne Rooney(England)
In 2002, Rooney made his professional debut as a 16 years old with Everton.  Less than a year later, he became England's youngest international.  He made his big tournament debut at Euro 2004.  he scored 4 goals and named as a member of the tournament's best XI.  At the time of writing, he is England's key player for every major tournament since Euro 2004.  As for Manchester United, he has won 5 Preimer League titles.  In 2008, he formed a partnership with Cristano Ronaldo and won the Champions' League.
ST: Mark Hughes (Wales)
Mark Hughes was best remembered for his spells with Manchester United.   He won two Premier League title medals, four FA Cups, three League Cups and two European Cup Winners' Cups. He was the first player to win the PFA Players' Player of the Year award twice, in 1989 and 1991. He also played with Chelsea, Southampton, Everton and Blackburn Rovers. He had 72 caps with Wales.


ST: Ole Gunnar Solskjær (Norway)
Ole Gunnar Solskjær was nicknamed "The Baby-faced Assassin".  He played 12 seasons for Sir Alex at Manchester United.  He is known to be "super sub" on the team.  He often scored important goals coming off the bench.  He was probably best remembered for scoring the winning goal against bayern Munich at the 1999 Champions' league Final. He was capped 67 times for Norway.

Squad Explanation
-- This is my selection of the greatest ever team under Sir Alex Ferguson.  I never checked if Sir Alex himself ever came up his own selection of his greatest 25 member team.  This is my opinion of his greatest ever team.
-- Peter Schmeichel, Cristano Ronaldo, Ryan Giggs, David Beckham, Roy Keane, Bryan Robson, Mark Hughes, Edwin Van Der Sar, Eric Cantona, Gary Neville, Rio Ferdinand, Nemanja Vidic, Denis Irwin, Wayne Rooney, Paul Scholas and Wayne Rooney are also on my Manchester United All-Time team.
-- I read his autobiography. He is very fond of Cristano Ronaldo.  However, he could not get along with Roy Keane at the end of his stay and after Keane's retirement as a player.
-- There are not many choices for the third keeper. Jimmy Leighton, and David De Gea were considered. De Gea might one day replace Barthez on the team.
-- The fourth centerback was between Pallister and Bruce. Bruce seemed to be rated higher.
-- Gary Neville has locked down the rightback position for too long.  No other rightback was considered. Or I should say no one could be considered. Denis Irwin is my backup rightback.
-- Sir Alex considered Denis Irwin his greatest signing.
-- Paul McGareth played for Sir Alex, but was better known for his feud with him.  The prime of McGareth's career was not under Sir Alex.   I did not put him even on Honorable Mention.
-- Lee Sharpe got the Honorable Mention because his peak was amazing (although it was short).  He was one of Sir Alex's star players. He was voted PFA Young Player of the Year in 1991. He also won a Cup Winners' Cup. He was one of the earlier "Fergie's Fledglings".
-- Alan Smith transferred to Manchester United in 2004, whereupon manager Sir Alex Ferguson successfully converted him to a holding midfielder.  I thought it was weird at the time, but Sir Alex had his special way to spot a talent.  Alan Smith was very good as a defensive midfielder.  I named Alan Smith as a honorable mention because of how Sir Alex handled him.
--  In general, Sir Alex's "Class of 1992" was considered his greatest homegrown talents.  From that team, David Beckham, Ryan Giggs, Gary Neville and Paul Scholes made my all-time team. Nicky Butt and Phil Neville made honourable mention.
-- I always believed Paul Scholas was underrated. At Manchester United, he was often overshadowed by Ryan Giggs, Roy Keane and David Beckham earlier in his career.  For the national team, he played at the same time as Steven Gerrard and Frank Lampard. He was actually as good as them.
-- Michael Carrick had a long career under Sir Alex.  He edged out Nicky Butt.
-- I should select both Andy Cole and Dwight Yorke as an unit. they were among the best, but Manchester United has too many legendary forwards: Cantona, Hughes, Rooney and Ronaldo.
-- Brian McClair was the last player dropped. The team is loaded with his type of players, but he spent 11 seasons with the club.  Terry Sheringham was left off because of too many forwards.
-- Wayne Rooney is Manchester United's all-time leading scorer and the only player to have scored 250 goals for the Reds.  I do not think the fans respected him as much as he deserved. 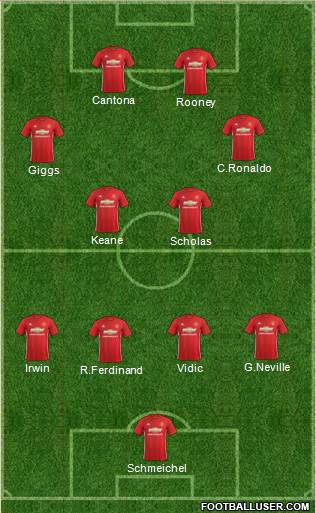