This is my selection of a 23 member all-time Brazil team before 1958.  The number 23 was chosen because it is the official squad size for the World Cup Finals.

Brazil was not known to be the greatest football nation until the emerge of Pele.  However, Brazil had many talented players before their first World Cup victory in 1958.  Leônidas da Silva dazed the crowd in the World Cup Finals of 1938 while Domingos Da Gua is still considered to be Brazil's greatest defender.  In 1950, Brazil had one of its greatest team, but only failed at the "Maracanazo". Zizinho, Jair and Ademir were known as one of the greatest forward line in Brazil's history.

Team
GK: Moacir Barbosa
Barbosa was one of the greatest keepers in Brazil's history, but he was, however, associated with Brazil's loss to Uruguay in 1950, in an upset loss dubbed as the Maracanazo.  He became the scapegoat of the event, which casted a shadow in his entire life.  He was also a member of the Brazilian team that won the 1949 Copa America.  For his club career, he played mainly for Vasco Da Gama.

GK: Carlos Jose Castilho
Carlos Jose Castilho went to 4 World Cup Finals: 1950, 1954, 1958 and 1962, but only played in 1954.  He had a reputation for being lucky, earning the nickname "Leiteira".  He played over 695 games for Fluminense. He was daltonic and he believed he was favored because he saw yellow balls as if they were red, though he had trouble at night with white balls. He also decided to partially amputate a finger so that he did not need to rest for an injury.

GK: Jaguaré
When playing with CR Vasco da Gama, he won the championship of Rio de Janeiro. He also played for FC Barcelona, Sporting CP and SC Corinthians Paulista. The most successful period of his career was in the 1930s with the French club Olympique Marseille. In Brazil, he is also considered to be the person who popularised the use of gloves by goalkeepers.

CB/RB: Augusto da Costa
He captained the Brazil team to the 1950 FIFA World Cup final leading them to become the runners-up of the tournament after losing to Uruguay. He was born in Rio de Janeiro. He started his career in 1936, with São Cristóvão, leaving the club in 1944. In 1945 he joined Vasco, retiring in 1954. He played 20 games for the Brazilian national team and scored one goal.

CB: Pinheiro
Pinheiro held the second highest appearance record for Fluminense. He was involved with over 600 games.  Pinheiro was Rio de Janeiro's champion in 1951 and 1959, Rio's 1952 Cup, Rio-São Paulo Tourney in 1957 and 1960, as well as several other lesser-known titles. Before Fluminese, he played for Americano.  At the club, he played for many position, including goalkeeper. He earned 17 caps, attending the WC Finals in 1954.

SW/CB: Domingos da Guia
Domingos da Guia was a star defender during the 1940's and considered to be Brazil's greatest defender. He was among the first skilled defender to play the game. He played for several clubs, but notably with Flamengo and Corinthians, and aboard with Boca Juniors. He had 30 caps for the Brazilian national team. He was a star at the 1938 World Cup Finals in France. He made the all-star team at that World cup Finals.  His son is Ademir da Guia.
CB: Juvenal Amarijo
Juvenal Amarijo started his career with Cruzeiro-RS, joining Flamengo in 1949, then Palmeiras in 1951, moving to Bahia in 1954 then retiring in 1959 while playing with Ypirnga-BA. He played for the Brazil in the 1950 World Cup. Juvenal lost his money after retiring from playing and was living in poverty.  He died on October 30, 2009, at to age 85, in the city of Salvador, in Bahia, Brazil, due to respiratory failure.

LB: Noronha
Noronha played for Grêmio, Vasco da Gama, São Paulo and Portuguesa. With Sao Paulo, he formed a great team with Rui Campos and Bauer. He was a member of the 1950 World Cup, but he did not play in the match, bittely known as "Maracanazo" for Brazilians.  He was a part of Brazil 1949 South American Cup winning team.

DM: Danilo Alvim
Danilo Alvim is considered one of the greatest defensive midfielder in Brazil's history.  He played 25 games for Brazil between 1946 and 1953, winning the 1949 Copa América. He played on the ill-fated 1950 team alongside Zizinho.  For his club career, he was a part of Vasco da Gama's legendary "the Victory Express" team, winning the South American club championship in 1948. He also played for America and Botafago.
CM/DM: Ely
Ely do Amparo played for  América and Canto do Rio.  Ely was a member of Vasco de Gama's "Expresso da Vitória squad" that won the Campeonato Carioca in 1945, 1947, 1949, 1950 and in 1952, winning the South American Club Championship in 1948 as well. He went to the World Cup Finals in both 1950 and 1954.

CM/DM: Fausto dos Santos
He was considered one of the best defensive midfielders of Vasco da Gama of the first half of past century. Popularly known as "Fausto, The Wonder Black" he was a pioneer to vindicate labor laws to footballers since the professionalization of Brazilian football in the beginning of the 1930s. He also played for other clubs, such as Bangu, Nacional of Montevideo and Flamengo.

With Internacional, Tesourinha was known to be a member of the club's famous "Rolo Compressor" team of the 1940's.  He was also a part of the legendary "Expresso da Vitória" at Vasco de Gama.  In 1952, he joined Grêmio, becoming the first black player  in history to play for the club.  For Brazil, he was capped 23 times. He was chosen as the best player for the 1945 South American Championship.  An injury kept him out of the 1950 World Cup Finals.

LW: Francisco Aramburu "Chico"
Francisco Aramburu known as "Chico" started with Gremio, but joined Vasco de Gama, where he was a member of the famous "Victory Express" team. In the 1950 World Cup Finals held in Brazil, he played four games and scored four goals. He played in the famous game against Uruguay, which lately became known as "Maracanazo".

LW: Francisco Rodrigues
Francisco Rodrigues played for the following clubs: Ypiranga-SP, Fluminense, Palmeiras, Botafogo, Juventus, Paulista and Rosario Central (Argentina). He earned 21 caps (3 non-official) and scored 9 goals (4 non-official) for the Brazil's Seleção, and was part of the team at the 1950 FIFA World Cup and the 1954 FIFA World Cup.

AM: Zizinho
Zizinho was Pele's idol.  He was considered the greatest Brazilian player before the 1960's. He was the star of the ill-fated World Cup Finals in 1950 playing alongside Jair and Ademir.  He played for Flamengo, Bangu, São Paulo FC, Audax Italiano of Chile among others teams. With, Flamengo, he won state championships in 1942, 1943 and 1944. He turned a chance to play in the 1958 World Cup Finals.
FW: Leônidas da Silva
Leônidas da Silva was known as "Black Diamond" and considered the greatest Brazilian footballer before the war. He was credited to be the inventor of "Bicycle Kick".  He played in two World Cup  Finals: 1934 and 1938. He was the top scorer at the tournament in 1938.  He played for a number of clubs in Brazil and Penarol. His longest spells were with Vasco Da Gama and Sao Paulo.
ST: Heleno de Freitas
The striker spent most of his career with Botafogo, scoring 209 goals for the club, most with his head. He also played for Boca Juniors in Argentina, Vasco de Gama, América (Rio) and Santos. He scored 19 goals in 18 appearances for Brazil as the team finished runners-up in both the 1945 and 1946 Copa America championships. He was joint top goalscorer in the 1945 tournament.

ST: Heitor
He was one of the most important players in the history of Palmeiras, being their greatest goalscorer of the team. He began his career in 1916, becoming the first idol of the club. In São Paulo, Heitor was a rival of Arthur Friedenreich, but together, they formed a great pair for the national team, notably in the South American championship of 1919.  He was also a star basketball player.

ST: Arthur Friedenreich
The "Tiger" was the first Afro-Brazilian professional players in Brazil.  He was also one of the first star players from Brazil. He played 22 times for Brazil, including wins in the 1919 and 1922 editions of the Copa América, scoring ten goals. He did not attend the first World Cup Finals in 1930 because only players from Rio traveled to Uruguay. He was a son of a German immigrant father and an African Brazilian mother.
Honorable Mention
Roberto Belangero, Agostinho Fortes Filho, Tim, Romeu Pellicciari, Adãozinho, Friaça, Hércules de Miranda, José Perácio, Cláudio,  Niginho, Índio, Teleco, Neco, Nena, Brandãozinho, Airton Pavolhao, Baltazar, Pinga, Martín Mercío Silveyra.

Squad Explanation
-- Domingos da Guia, Danilo Alvim and Zizinho are on my Brazil All-Time Team. Arthur Friedenreich and Leônidas da Silva deserved to be on that team, but they were left off that team because Brazil had too many great players.  Both of them were Brazil's early football idols.
-- Brazil reached the semi-final of the 1938 World Cup Finals.  Leônidas da Silva and Domingos Da Gua were the big stars of the tournament.  Niginho also made honourable mention.
-- Leônidas da Silva was probably Brazil's first international star.  he was credited for inventing the bicycle kick.  Domingos da Guia is probably known as the player who invented the term "cultured" defender.  He is widely considered Brazil's greatest defender.
-- I do not know much about Niginho as player, but his story was interesting.  He came from a footballing family, where he played with Lazio in Italy with his cousin and brother. He returned to Brazil to avoid joining the Italian army.  In 1938, he went to 1938 World Cup Finals, but he was kept off the field because he was considered an army deserter by the Italians.  The Italians complained to the FIFA.  He made honourable mention.
-- The "Maracanazo" (the 1950 World Cup match where Brazil lost to Uruguay) was one of Brazil's darkest moment in football history. However, the team was one of the most talented Brazilian team ever assembled in a World Cup Finals.  Zizinho, Jair, Ademir, Danilo Alvim, Ely, Francisco Aramburu "Chico", Francisco Rodrigues, Carlos Jose Castilho, Augusto da Costa, Juvenal Amarijo, Noronha and Bauer made this team.  Tesourinha who missed the Finals through an injury also made this team.
-- Danilo Alvim made my Brazil All-Time Team because he was more defensive than some of Brazil's greatest central midfielders.
-- Zizinho was Pele's idol.  He was Brazil's greatest player before Pele.  Jair, Ademir and Zizinho formed a famous attack line at the 1950 World Cup Finals. It was often listed among Brazil's greatest offensive line.
-- Moacir Barbosa was noted for being the scapegoat for the "Maracanazo" in the 1950 World Cup Finals.  He was actually one of Brazil's greatest goalkeeper up until that period in history.
-- Pinheiro held the second highest appearance record for Fluminense. He was involved with over 600 games.
-- Most football teams played without fullbacks until after the war. So it is difficult to find suitable fullbacks.
-- Júlinho only went to the 1954 World Cup Finals, but he continued to be capped by Brazil after 1958. Canhoteiro also capped after 1958. Both were considered Brazil's greatest wingers, but both are ineligible because they were still playing after 1958.
-- Canário's last cap was in 1956, but he was born in 1934.  He was 28 years old in 1958, which was still in his prime in terms of age.  While he was eligible in terms of representing Brazil before 1958, he probably would be considered a generation after 1958 because of his age.  Luizinho was also 28 years in 1958. His last cap was 1957. Both were ineligible.
-- Heitor was one of the most important players in the history of Palmeiras, being their greatest goalscorer of the team. Heitor played with Arthur Friedenreich on the national team.

Formation
The formation is based upon the lineup of the 1950 World Cup team. 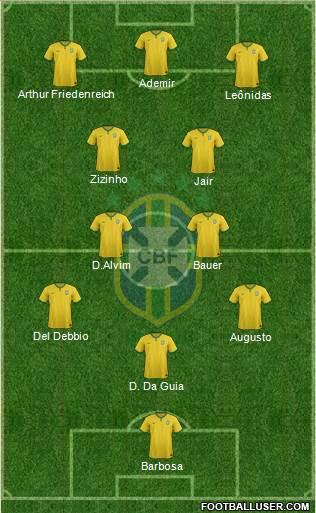