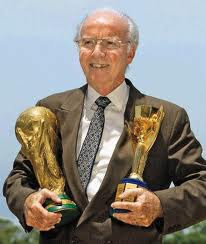 This is my selection of a 23 member all-time Brazil team under Mario Zagallo.  The number 23 was chosen because it is the official squad size for the World Cup Finals.

No Brazilian has a greater impact on Brazil's World Cup wining teams than Mário Zagallo.  He was associated with Brazil's first four World Cup winning teams.  He was a player on the 1958 and 1962 team, and was the manager on the 1970 team.  In 1994, he served as an assistant manager when Brazil won its fourth World Cup Finals.  This is a selection of players who played under him for Brazil.  I am excluding the players who played under him as an assistant manager.
Team
GK: Claudio Taffarel
Claudio Taffarel earned over 100 caps.  He was the starting goalkeeper for the World Cup winning team in 1994. During an 18-year career, he played professionally for six clubs, including Parma, Internacional, Atlético Mineiro and Galatasaray. He won an UEFA Cup with Galatasaray, which was the first ever European trophy for a Turkish club team.

GK: Emerson Leao
Emerson Leao played 80 times for Brazil. He won a World Cup in Mexico 1970 as the backup keeper.  He started at West Germany 1974 and Argentina 1978.  He was the first Brazilian goalkeeper in history to be team captain (during the 1978 World Cup). At the club level, he played for several clubs, his longest term being at Palmeiras.

GK: Felix
Felix played goalkeeper for Atlético Juventus and Associação Portuguesa de Desportos and Fluminense. With Fluminense, he won won Campeonato Carioca: 1969, 1971, 1973, 1975, 1976.  He has 47 caps with the Brazilian Seleção.  He was known for being the starting keeper for the 1970 World Cup-winning squad.

RB: Carlos Alberto
Carlos Alberto was one of the greatest fullback ever played the game. He was the captain of the 1970 World Cup winning team in Mexico.  His goal in the 1970 Final was considered one of the greatest goals in the history of the tournament. He missed the World Cup Finals in 1974 through an injury.  He had 53 caps for Brazil.  At the club level, he played with Pele both at Santos and NY Cosmos. He also played with Fluminense FC and Flamengo.
RB: Cafu
Cafu is the all-time cap record holder for Brazil with 142.  He is the only man to play in three World Cup Finals, winning in 1994 and 2002.  He was the captain of the national team as they won the World Cup in 2002.  With Brazil, he also took part in four editions of the Copa América, winning the title twice, in 1997 and 1999. He played with Sao Paulo, Roma and AC Milan. He was South American Player of the Year in 1994.

CB: Brito
Brito was best remembered as a part of Brazil's great World Cup team in 1970.  He had a total of 45 caps.  He also played a single game at the 1966 World Cup Finals.  He played over 10 years with Vasco De Gama. He also played for Internacional, Flamengo, Cruzeiro, Botafogo, Corinthians, Atlético Paranaense and River-PI.

CB: Aldair
Aldair played for Flamengo before heading to Europe.  He started with Benfica, but he was widely remembered for his 13 seasons with Roma.  The club retired his #6 jersey for 10 seasons.  For the national team, he had 80 caps.  He was a key member of the great defensive unit of the World Cup winning team in 1994.   In addition, he also played in the World Cup Finals 1990 and 1998.

CB/DM: Wilson Piazza
Piazza almost spent his entire career with Cruzeiro.  He was the greatest captain in the history of Cruzeiro. He helped the club to win the Copa Libertadores in 1976.    For the national team, he won 59 caps.  He was the starting centerback for the 1970 WC winning team.  He also went to the World Cup Finals in 1974.

CB: Luis Pereira
Luis Pereira was widely considered to be the best central back in the Seleção's history. He was capped over 30 times, but only the 1974 World Cup Finals held in West Germany and remembered receiving a red card against Holland. He played 562 games with S.E. Palmeiras (34 goals) and 171 games with Atlético Madrid (17 goals). With Atletico Madrid, he was considered one of the best defender playing in Europe.  He won La Liga in 1977.

LB: Roberto Carlos
Roberto Carlos was regarded one of the best leftbacks in history.  He had 125 caps for Brazil playing in three World Cup Finals. He won 3 Champions League titles with Real Madrid and one World Cup title with Brazil in 2002.  In 1997 he was runner-up in the FIFA World Player of the Year.  He is especially famous for a free kick from 35m out against France in the  Tournoi de France 1997. The goal is considered one of the greatest goals ever scored.


LB: Marinho Chagas
Marinho Chagas was a top leftback during the 1970's and was known as being a right-footed left back.  He was the starting left back at the 1974 World Cup Finals. He played for many clubs in Brazil, USA and Germany.  His longest stint was with Botafago, which lasted 4 years.  He played with Franz Beckenbauer and Carlos Alberto for NY Cosmos.

DM: Dunga
Dunga's bluecollar and defensive style of football symbolized a new era in Brazil's football.  This period in Brazil's football history was called "Era Dunga", as according to fans and journalists. He played 91 times for Brazil.  He was the captain of Brazil's World Cup winning team in 1994. He also went to Italia 1990 and France 1998.  For domestic football, he played in Brazil, Japan, Italy and Germany in his career.

DM: Clodoaldo
Clodoaldo was a member of Pele's Santos in the 1960's.  He is best remembered for being the defensive midfielder of the 1970 World Cup Team in Mexico.  At the Final, he contributed to Carlos Alberto's famous goal against Italy by dribbing past 4 Italian players. He was capped 38 times. At the club level, he also played for Tampa Bay Rowdies (1980), New York United (1980) and Nacional-AM (1981).

Gerson was the central midfielder for Brazil in the 1970 World Cup Finals. He held 70 caps for Brazil. He is considered one of Brazil's best ever passers.  He played on the legendary Botafogo's team of in the 1960's with Garrincha.  While at the club, he played with Didi and became his understudy, in which he would inherit the position on the Seleção.

RW: Jairzinho
"The Hurricane" was a star at the 1970 World Cup Finals.  He was one of two players who had scored at every single game of a given World Cup Finals.  He also went to play in the 1974 World Cup Finals in West Germany.  For his club career, he played for the famous Botafago team of the 1960's.  He was an understudy to Garrincha, whom he would also replace on the national team. He also played in France with Marseille.

AM: Dirceu
Dirceu were on three World Cup teams: 1974, 1978 and 1982.  His best tournament was in 1978, where he made the All-tournament team and awarded the Bronze Ball.  For his club career, he played for various clubs in Brazil and Mexico before joining Atletico Madrid in 1979.  From 1982 to 1987, he played for 5 different Italian clubs.

LW/AM: Rivelino
Rivelino is considered to be one of the greatest left-sided midfielder ever.  He was a member of Brazil's great 1970 team and also played in the 1974 team.  He had 92 caps for Brazil.  He was known for his master of the "flip flap" move. He started his career with Corinthians, but in one of the club's worst period in history. He moved to Fluminense in 1974, forming a great team with Carlos Alberto.  He also played for Al Hilal in Saudi Arabia.

AM/FW: Rivaldo
Rivaldo was a part of the attacking trio known as "Three R's" with Ronaldo and Ronaldinho at the 2002 World Cup Finals.  He scored 5 goals in 5 games as Brazil took its 5th World Cup.  He also went to the WC Finals in 1998. For his club career, he was known for his career with Barcelona in Spain.  He won the 1999 Ballon d' Or.

FW: Pele
Pele is considered the greatest player ever in the history of the game.  He won his first World Cup in 1958 as a 17 years old.  He would win his second one in 1962, but he was injured throughout the tournament. In 1970, he won his third and final World Cup, with a team that was considered the greatest ever.  He played almost his entire career with Santos, one of the best club side in history.  He unretired to join New York Cosmos in 1976.

ST: Bebeto
Bebeto is the sixth highest goalscorer for his national team.  At the 1994 World Cup, he formed a formidable strike partnership with Romário to lead Brazil to their fourth World Cup title.  His best club career was with Deportivo La Coruna, where won the Pichichi Trophy in 1993.  He played for Flamengo, Vasco da Gama, Cruzeiro, Botafogo, Sevilla, Toros Neza, Kashima Antlers, and Al Ittihad.

ST: Tostao
Tostao was the starting forward of Brazil's 1970 WC Team. He was a false nine, providing assists for the rest of the team.  He nearly missed the World Cup Finals due to an eye injury.  He also went to England 1966.  He was South American Player of the Year in 1973.  He played 11 years with Cruzeiro.  In 1972, he signed for CR Vasco da Gama for a then record fee in the country He is also a medical doctor.

ST Romario
Romario helped the Seleção to win the 1994 FIFA World Cup, receiving the Golden Ball as player of the tournament. He was named FIFA World Player of the Year the same year. He missed the 1998 WC Finals because of an injury. One of very few strikers to surpass the mark of 1,000 goals. He was best remembered for his stint with Barcelona.

ST: Ronaldo
Ronaldo was the greatest player of his generation. He led Brazil to two World Cup Finals match, winning the one in 2002.  He scored 8 goals in 2002.  He was a  youngster at the 1994 World Cup winning team.  He was the winner of Ballon d'Or twice and the FIFA World Player of the Year three times.  He is the second top-scorer in World Cup history.  He played for both Barcelona and Real Madrid, and for both AC Milan and Inter Milan. 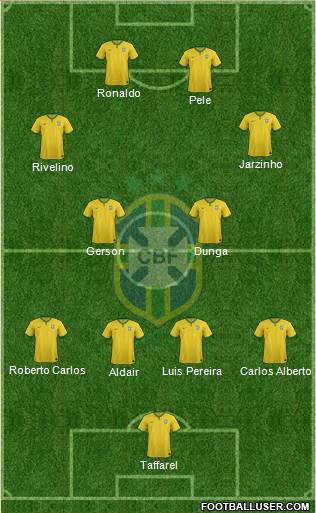