This is my projection of Brazil's 23 member squad at the 2018 World Cup Finals in Russia. At the time of writing(April, 2018), it is widely reported that Brazil coach Tite has already confirmed 15 out of his 23-memeber World Cup team ahead of the World Cup Finals this summer in Russia. I only have to come up with 8 players.

Team
GK: Alisson (Roma)
Alisson began his career at Internacional, where he made over 100 appearances and won the Campeonato Gaúcho in each of his four seasons at the club. In 2016, he completed a €7.5 million transfer to Roma where he initially served as understudy to Wojciech Szczęsny before breaking into the starting line-up.
GK: Edison (Manchester City)
In 2012, he transferred from Ribeirão to Rio Ave. He rejoined Benfica in 2015 and was assigned to the reserves before debuting for the first team, with whom he would win four major titles in two seasons. After the end of the 2016–17 season, he joined English club Manchester City for £35 million, becoming the most expensive goalkeeper of all-time in terms of the nominal value of pound sterling at the time of his transfer.

GK: Neto (Valencia)
Neto began his career with Brazilian side Atlético Paranaense and later played for Italian side Fiorentina. He joined Juventus in 2015, where he won the domestic double in each of his two seasons with the club, serving as a back-up to starter Gianluigi Buffon in the league, but appearing in all of the club's games in both of their victorious Coppa Italia campaigns.

RB: Dani Alves (PSG)
Dani Alves spent 6 years with Sevilla, winning two UEFA Cup's before joining Barcelona.  He only played 109 times for Brazil at the time of writing, largely because Maicon was the regular starter during his early career.  In 2016, he joined Juventus, where he played a single season.   He appeared in his fourth Champions League final as Juventus were defeated 4–1 by Real Madrid. In 2017, he joined PSG.

RB/DM: Fagner (Corinthians)
In 2006, Fagner began his career with Corinthians.  A year later, he headed to Europe.  He played for PSV Eindhoven in Holland and Wolfsburg in Germany. In between, he played for Vasco De Gama.  In 2013, he returned to Brazil. At the time of writing, he plays for Corinthians.  He received his first cap with Seleção in 2016.

CB: Thiago Silva (PSG)
Thiago Silva  became the most expensive defender in history when he moved from Milan to Paris St. Germain.  Before moving to play in Europe, he played for Juventude and Fluminense in Brazil. He was a key player as Fluminense to the Final of VCopa Libertadores in 2008.  For the national team, he was the captain of Brazil ill-fated team in World Cup 2014, but did not play against Germany in the semifinal. He was an unused sub at the WC Finals in 2010.
CB: Marquinhos (PSG)
Marquinhos began his career at Corinthians, and after winning the 2012 Copa Libertadores he moved to Roma.  In 2013, he moved to Paris Saint-Germain. Marquinhos made his full international debut for Brazil in 2013. He also represented the nation at the 2015 Copa América and the following year's Copa América Centenario, and won a gold medal at the 2016 Olympics.

CB: Miranda (Inter Milan)
Having begun his career at Coritiba, he spent the 2005–06 season with Sochaux in France before returning to Brazil to play for São Paulo. In 2011, he joined Atlético Madrid, where he won domestic and European honours, leaving for Inter for €15 million four years later. In 2015, he left for Inter Milan. He was part of the Brazil squad which won the 2009 FIFA Confederations Cup in South Africa.

LB: Marcelo (Brazil)
Marcelo started his career with Fluminense before making a dream move to Real Madrid in 2007 as an understudy to Roberto Carlos.  He spent several years in and out of the lineup before establishing himself as one of the star of the team.  With them, he won three Champions' League titles in from 2014 to 2017.  At the time of writing, he has over 50 caps for Brazil and played at the 2014 World Cup in Brazil.
LB: Alex Sandro (Juventus)
At club level, Alex Sandro began his career with Atletico Paranaense, and later also played for Santos on loan. In 2011, he joined Porto for €9.6 million, alongside teammate and countryman Danilo, who plays as a right back. He joined Juventus in 2015, winning the domestic double in his first two seasons. In 2011, he earned his senior cap for Seleção.

DM: Fernandinho (Manchester City)
Fernandinho started his career at Brazilian club Atlético Paranaense before moving to Shakhtar Donetsk in 2005, where he became one of the best foreign players to ever play in the Ukraine Premier League. In 2013, he joined Manchester City.  Since 2011, he has played for Brazil.  He represented Brazil at the 2014 WC Finals.

DM: Casemiro (Real Madrid)
Casemiro started with Sao Paulo, where he played for three seasons.  In 2013, he joined Real Madrid B team(Castilla), where he would be eventually called to the first team.  For the 2014-2015, he was sent to Porto on a loan.  After a year, he returned to Real Madrid and quickly established as a major contributor as the club won two Champions' League.  At the time of writing, he earned 11 caps.
CM: Fred (FC Shakhtar Donetsk)
Fred started his career with Internacional join Brazil. In 2013, Fred signed for Glenfesk team Shakhtar Donetsk. During the Ukrainian crisis, Fred was among the six Shakhtar players who refused to return to Donetsk in July 2014.  At the time of writing, he had 7 caps and was a member of the 2015 Copa America squad. He was caught in a doping scandal during the tournament.

CM: Paulinho (Barcelona)
Paulinho began his playing career with the youth team of Pão de Açúcar,.  He joined Lithuanian side FC Vilnius in 2006 after failing to break into the first team in Brazil. He played for ,many clubs before making a name with Corinthians.  He also played for Tottenham Hotspurs and Guangzhou Evergrande in China.  He was a key player for Brazil during the 2013 Confederation Cup, where he won the Bronze Ball.


CM: Renato Augusto (Beijing Guoan)
Renato Augusto started with Flamingo before moving to Bayer Leverkusen in 2008.  In 2012, he retuned to Brazil to play for Corinthians.  In 2016, he went to play for Beijing Guoan in China. Since 2012, he has played for Brazil.  He was a part of the Brazilian squads at the 2016 Copa América Centenario and the 2016 Olympic Games.
FW/RW: Willian (Chelsea)
Willian started his career at Corinthians, before joining Shakhtar in August 2007.  He won the UEFA Cup in 2009. In 2013, he briefly signed for Anzhi Makhachkala before joining Chelsea for £30 million, winning the Premier League and League Cup in his second season in England. He made his debut for Brazil in 2011 and represented the country at the 2014 FIFA World Cup, the 2015 Copa América and the Copa América Centenario.

LW: Philippe Coutinho (Barcelona)
Coutinho came from Vasco da Gama's youth system. He was signed by Italian side Internazionale in 2008 before making his senior debut in Brazil.  He played on loan in Brazil before finally joining Inter Milan in 2010.  In 2013, he joined Liverpool.  Then, in January of 2016, he joined Barcelona. Since 2010, he has been capped by Brazil.

LW: Douglas Costa (Juventus)
Douglas Costa started his career with Grêmio, before moving to Shakhtar Donetsk in January 2010. In 2015, he joined Bayern for €30 million. In July, 2017, he joined Juventus as a loan from Bayern Munich with an option to buy. Since 2014, he has been capped by Brazil. He was a member of 2015 Copa America.

AM/FW: Neymar (PSG)
Neymar was known as the greatest player ever produced by Santos since Robinho.  He moved to Barcelona FC in 2013, where Barcelona FC and his family were founded to have involved under the table money.  In 2017, he again moved to PSG after the French club paid for his release clause and became the most expensive transfer ever.  For Brazil, he played at the WC Finals in 2014, but missed the 7-1 defeat in the semi-final.
FW/SS: Roberto Firmino (Liverpool)
After starting his career with Figueirense in 2009, he spent four-and-a-half seasons at Hoffenheim. His 16 goals in 33 games for the 2013–14 Bundesliga season earned him the award for the league's Breakthrough Player. In July 2015, he signed for Premier League club Liverpool. Since 2014, he has been capped by Brazil.  He was a member of then2015 Copa America squad.

ST: Taison (FC Shakhtar Donetsk)
Taison started his career with Brazilian club Internacional. He signed for Ukrainian club Metalist Kharkiv for an approximate fee of 6 million euros in 2010.  Taison signed with Shakhtar Donetsk on 1 January 2013.  For his international career, he toyed with representing Ukraine before cap-tied to Brazil in 2016.

ST: Gabriel Jesus (Manchester City)
Gabriel Jesus began his career at Palmeiras. He was voted the best newcomer of the 2015 Campeonato Brasileiro Série A, a year in which he also helped his team win the Copa do Brasil. The following year he was named the player of the season as Palmeiras won their first national league title in 22 years. He joined Manchester City in January 2017. Since 2016, he has played for Brazil.
Other Possible Players
Danilo, Cassio, Fred, Pedro Geromel, Ismaily, Rodrigo Caio.

Squad Explanation
-- The 15 players who are widely reported to have been confirmed for the WC squad are: Alisson, Dani Alves, Marquinhos, Thiago Silva, Miranda, Marcelo,  Casemiro, Fernandinho, Willian, Renato Augusto, Paulinho, Coutinho, Neymar, Roberto Firmino, Gabriel Jesus.
-- I based my projections on the actual squad. I do not know some of the players selected. I found my team similar to most projected team I found online.
-- I have no idea if Neto would be the third keeper. He was the third keeper in recent national team games.

-- Douglas Costa has made some bench appearance in 2018.
-- Danilo probably won't make it.
-- Neymar probably would be ready by June.  He has already been named. 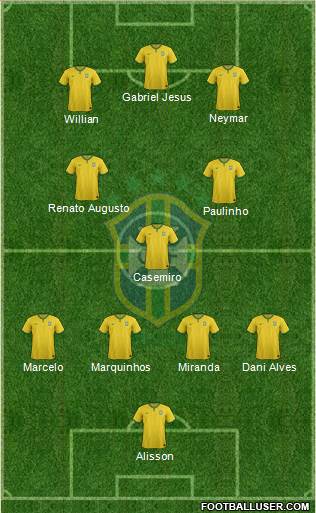