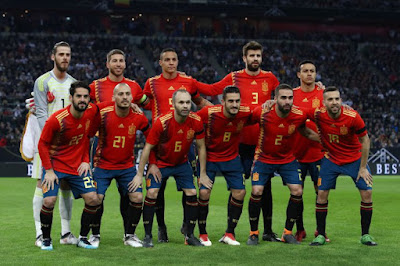 This is my projection of Spain's 23 member squad at the 2018 World Cup Finals in Russia. At the time of writing(April, 2018), I came up with players with the most often used in recent games.


Final squad different vs my prediction on this blog
Out: Pedro, Álvaro Morata

Team
GK: David De Gea (Manchester United)
De Gea began his career with Atlético Madrid.  He helped the team win both the Europa League and the Super Cup in 2010.  He joined Manchester United in June 2011 for £18.9 million, a British record for a goalkeeper at the time. At the time of writing, he only had 27 caps.  He was Iker Casillas' backup in the 2014 World Cup Finals. He finally became the starter at Euro 2016.

GK: Kepa Arrizabalaga (Athletic Bilbao)
Kepa started his careeer with Athletic Bilbao, but he played his first professional games on loan at Ponferradina and Real Valladolid, in Segunda División. Since 2016, he has been the starting keeper for Athletic Bilbao. Arrizabalaga represented Spain up to full level, winning the 2012 European Championship with the under-19 team.

GK: Pepe Reina (Napoli)
Reina first became a star at Villarreal when he helped the club to reach the Champions' league for the first time in history.  A year later, he joined Liverpool FC. At Liverpool FC, he won three Premier League Golden Glove. He was a part of Spain at World Cup 2010, Euro 2008 and Euro 2012, but served as a backup to Iker Casillas.

RB: Dani Carvajal (Real Madrid)
Carvajal went through Real Madrid's academy.  In 2012, he was sold to Bayer Leverkusen. In his only season there, he established himself among the best fullback in Bundesliga.  He returned to Real Madrid in a buyback clause. He was a contributor as Real Madrid won three Champions' League in his first 4 seasons.  At the time of writing, he is a member of the national team.
RB/LB/CB: Cesar Azpilicueta (Chelsea)
A youth product of Osasuna, he spent three seasons in La Liga before switching to Marseille, winning four major honours with the French club. In the summer of 2012 he moved to Chelsea, winning the Europa League in his first season and a domestic double two years later.  For the national team, he was selected for the 2014 World Cup and Euro 2016.

He started playing with Osasuna in 2005, going on to appear in 144 official games over the course of five La Liga seasons. In 2011 he signed with Málaga and, two years later, joined Arsenal, winning three FA Cup trophies with the latter club. A full international since 2009, Monreal represented Spain at the 2013 Confederations Cup.


Ramos was an important part of the all-conquering Spanish team that won the 2010 World Cup  and two European Championships.  He is Spain's youngest player ever to receive his 100th caps. He has been named La Liga's Best Defender a record four times. In 2005, he joined Real Madrid as a teenager from Sevilla.  With Real Madrid, he won three Champions League. He scored the tying goal as Real Madrid won their 10th European Cup in 2014. At the time of writing, he is the captain of Real Madrid.


CB: Gerard Pique (Barcelona)
Pique started his career with Barcelona's academy, but left for Manchester Uniued. In England, he was seldom used by the team.  he returned to Spain in 2006 with Zaragoza.  He gradually became a good defender in La Liga.  At the time of writing, he has been capped over 90 times.  His grandfather, Amador Bernabeu, is a former vice-president of Barcelona.

CB/LB: Nacho (Real Madrid)
Nacho arrived in Real Madrid's youth system at the age of 11. He made his senior debuts in 2008–09, playing two games with the reserves in Segunda División B and subsequently appearing in a further two full seasons in that level. Since 2011, he has been a regular for the senior team, serving mainly as a backup.  Since 2013, he has 12 caps for Spain.

LB: Jordi Alba (Barcelona)
Alba started his career at Barcelona, but was released for being deemed too small. After joining neighbouring Cornellà he finished his development at Valencia, rising to prominence in La Liga with the club; in 2012, he returned to Barcelona. He represented Spain at the 2014 World Cup and two European Championships,
DM: Sergio Busquets (Barcelona)
Sergio Busquets  did the dirty work in the midfield during Spain's glorious run at the World Cup in 2010 and the European Championship in 2012. He also represented the nation at the 2014 World Cup and Euro 2016. For his club career, he played for Barcelona.  He is probably for his racist against Marcelo during an El Classico game.

CM: Koke (Atletico Madrid)
Koke spent most of his career with Atlético Madrid since making his debut with the first team in 2009, playing over 300 official games and winning five honours, including the 2014 national championship and the 2012 Europa League. He won the 2013 European Championship with the Spanish under-21 team. He also made his debut for the full side that year, and represented the country at the 2014 World Cup and Euro 2016.


Saúl moved to Atlético Madrid in 2008 at the age of 13. He made his first debut at the age of 17.  He spent the following season with Rayo Vallecano in a season-long loan deal. He has been called up to the senior national team since 2016 while he became a key player for his club team at the same time.


LM/CM/AM:  Andres Iniesta
Iniesta scored the WC winning goal in 2010 that gave Spain its first ever WC title. At Euro 2012, Iniesta led Spain to their second consecutive continental crown, again being chosen as the Man of the Match of the final against Italy, and was named the Player of the Tournament. He also won Champiosn' league trophies with Barcelona.

CM: Thiago Alcantara (Bayern  Munich)
He is the son of the 1994 World Cup winner Mazinho.  He was born in Italy when his father was playing in Italy. He grew up in both Spain where his father played, but moved back to Brazil after his father retired.  He joined Barcelona in 2005.  He was a star with the Sapish Under-21 team as they won the European Under-21 Championship in 2013.  In 2013, he shocked the Barcelona fans by joining Bayern Munich.  His career in Germany has been limited by injuries.


Silva became a starter at Valencia in 2006 which forced Palbo Aimar to leave the club.  In 2010, he joined Manchester City helping the club to win their first Preimership in over 40 years. For Spain, he had 118 caps from 20006 onward.  He was a key player throughout the period Spain won the "triple crown": two European Championship and a World Cup.

AM: Isco (Real Madrid)
Isco began his career at Valencia before joining Málaga in 2011. His performances at Malaga earned him the Golden Boy award in 2012, and a €30 million move to Real Madrid in June 2013. At the time of writing, he won three Champions' League title with Real Madrid. Isco also starred at the 2013 European Under-21 Championship in Israel.  Since 2013, he has been with the national team.
RW: Lucas Vázquez (Real Madrid)
Lucas Vázquez came from Real Madrid's youth academy. He spent 2014-2015 season on loan to La Liga's RCD Espanyol.  After a season, he returned to Real Madrid.  In hist first season, he won the Champions' League and was one of the penalty kickers in the Final.  he won his second title the following year. Internationally, he was selected to the Euro 2016 team.

FW: Pedro (Chelsea)
Pedro won 20 titles for Barcelona from 2008 to 2015.  In 2015, he joined Chelsea in the English Preimer League.  He was a part of the Spanish national team that won the World Cup in 2010. He again played for Spain at the European Championship in 2012.

FW/LW: Marco Asensio (Real Madrid)
Born in Palma, Majorca, Balearic Islands to a Dutch mother and a Spanish father, Asensio joined RCD Mallorca in 2006. He joined Real Madrid in 2014, but he spent his first season with Espanyol. He finally joined Real Madrid for the 2016-2017 season, scoring one of the goals at the Champions' League Final against Juventus. Since 2016, he has been capped by Spain.
ST: Rodrigo  (Valencia)
Born in Brazil, Rodrigo started his career with Real Madrid, appearing solely for its reserve teams. In 2010 he signed with Benfica with whom he won four titles, most notably the domestic treble in the 2013–14 season. He joined Valencia in 2015. He has represented Spain at youth level and he received his first senior cap in 2014.


ST: Diego Costa (Atletico Madrid)
Until the age of 16, he was not playing for club football.  He joined Atletico Madrid in 2006, but did not become a star until the 2013-2014 season.  In March, 2013, he made his national debut for Brazil.  However, by summer of 2013, he decided to switch his commitment to Spain after becoming Spanish citizens, which caused a controversy in Brazil. He is believed to be the first Brazilian to turn his back against his country and play for a different national team.  In February, 2014, he made his Spanish debut and went to Brazil 2014 for Spain.

ST: Álvaro Morata (Chelsea)
Morata began his career at Real Madrid, making his debut with the senior team in late 2010, winning the 2014 Champions League. He moved to Juventus in 2014, winning the domestic double of Serie A and Coppa Italia in both of his seasons before being bought back for €30 million. With Real, Morata won another La Liga and Champions League before joining Chelsea in 2017 for a club record transfer fee of around £60 million. Since 2014, he was capped by Spain and went to Euro 2016.
Other Possible Players
Vitolo, Iago Aspas, Suso, Marc Bartra, Álvaro Odriozola, Asier Illarramendi, Gerard Deulofeu.

Squad Explanation
-- Vitolo, Iago Aspas, Marc Bartra and Suso were seriously considered.  Suso would probably go to the World Cup Finals.
-- Lucas Vázquez got the last spot because he is a right winger. I have plenty of left-side wide player, but Lucas is the only one on  the right.  I feel that Julen Lopetegui would select someone else.  He would probably take Suso.
-- Rodrigo made the squad, largely because of his goals in recent friendly matches. He also started against Germany in the recent friendly match.

Formation
Spain probably has more options.  This lineup is based upon their starting lineup vs Germany in March, 2018. I am happy to start with Morata. 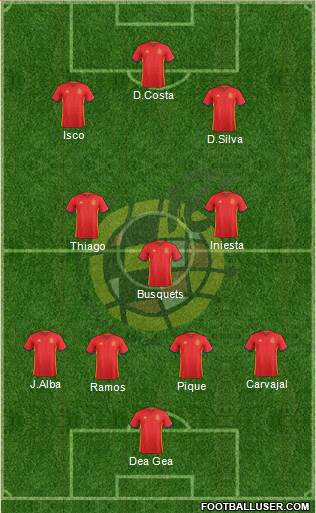