Greatest Players from each African Nation
I did all-time teams for Algeria, Morocco, Egypt, Ghana, Senegal, Cameroon, Ivory Coast, South Africa and Nigeria.  The rest of Africa is divided into Northern Africa(including Sudan) and Sub-Saharan Africa.  This is the Sub-African All-time team without those countries and the Northern African countries.  Of course, I also did an Africa All-Time Team.

Team
GK: Bruce Grobbelaar (Zimbabwe)
Bruce Grobbelaar made 628 appearances for Liverpool in 13 years.  He was considered among the best England-based keepers of his generation and a legend with Liverpool. He won the 1984 European Cup, 6 English league titles and 3 FA Cups. Born in South Africa, he moved to Rhodesia as a child.  He played one game for Rhidesia in 1977.  From 1980 to 1998, he was capped 32 times by Zimbabwe, but with several years where he was absent for the national team.

GK: Kazadi Mwamba (Zaire/Congo)
He led his country to victory in the 1968 African Cup f Nations.  However, he was probably remembered for Zaire's poor performance at the WC Finals in 1974. At the 1974 World Cup, in a group game against Yugoslavia, Kazadi conceded three goals in the first 20 minutes and was substituted. Kazadi was the first goalkeeper to be changed for a reason other than an injury or physical problem in a World Cup.

GK: Tommy Sylvestre (Togo)
Sylvestre began his career with local side Étoile Filante de Lomé, helping the club reach the finals of the 1968 African Cup of Champions Clubs. In 1974, he moved to Côte d'Ivoire with Stade d'Abidjan and Stella Club d'Adjamé. At the 1972 African Cup of Nations finals, he was named the best goalkeeper. In 2006, he was selected by CAF as one of the best 200 African football players of the last 50 years.[

RB: Fousseni Diawara (Mali)
Starting his career in Parisien club Red Star 93, he moved to AS Saint-Étienne in 2000 and made his debut against Rennes in September. On January 30, 2008 he joined Panionios. On September 10, 2009 he signed a 1-year deal with FC Istres and comes from Greek football club Panionios F.C. He signed for AC Ajaccio on 16 June 2010. He had over 50 caps with Mali.

CB: Julien Kialunda (Zaire/Congo)
Born in 1940, Julien Kialunda won the 1968 African Cup f Nations.  However, he was a part of Zaire's ill-fated team at the World Cup Finals in 1974. He played his club football mainly in Belgium.  He had a successful stint with Anderlecht. He is considered one of Africa's greatest defenders in the 1960's.

SW: Bwanga Tshimen (Zaire/DR Congo)
Bwanga Tshimen was nicknamed "Black Beckenbauer".  He is widely considered one of the best defenders from Africa.  He won the 1973 African Footballer of the Year.  He was a part of  Zaire's ill-fated team at the 1974 World Cup in Germany, in which Zaire played poorly.  For club football, he played for TP Mazembe back home.

CB: Dickson Makwaza (Zambia)
Dickson Makwaza is one of the most decorated players in Zambian soccer history and was captain of the Zambian national team that made its first ever appearance at the African Cup of Nations tournament in Egypt in 1974. Makwaza also captained Mufulira Wanderers and was voted Zambian footballer of the year in 1973.

LB: Hérita Ilunga (DR Congo)
Born in Zaire/DR Congo, Hérita Ilunga started his youth career in France.  He later played all over Europe for Espanyol B, Saint-Étienne, Toulouse, West Ham United, Doncaster Rovers, Rennes, Carquefou, and US Creteil. His best stunts was with Saint-Étienne between 2003 and 2007. Internationally, he was capped 32 times for DR Congo.

DM: Chérif Souleymane (Guinea)
He moved to East German as 17 years old as a student.  Over there, he played for SC Neubrandenburg in the second-tier DDR-Liga for two seasons, from 1962 to 1964. He returned to his home country and spent the rest of his playing career with top-tier Hafia FC. He was African Player of the Year in 1972.  He was a part of Guinea's great team in the 1970's.  He played in the 1968 Olympics.

DM: Mahamadou Diarra (Mali)
Mahamadou Diarra played with Greek club OFI Crete and Dutch club Vitesse in the Netherlands, but made his name with Lyon.  In 2006, he made a big move to Real Madrid.  He helped the Spanish giants to win the league title.  Diarra had now been a league champion for six consecutive seasons, after winning Ligue 1 with Lyon between 2002–03 and 2005–06, and La Liga with Real Madrid in 2006–07 and 2007–08.  Later, he would play for Monaco and Fulham.  With Mali, he was 69 times.
CM/DM: Mohamed "Momo" Sissoko (Mali)
Momo Sissoko began his professional career with Valencia in Spain.  He would play for Liverpool, PSG, Juventus, Forientina and Shanghai Shenhua. Born in France, he was capped by Mali between 2003 and 2013. He is the nephew of Salif Keita, and the uncle of Seydou Keita. He later played in Mexico, India, China ands Hong Kong at the end of his career.

CM: Seydou Keita (Mali)
Seydou Keita started his professional career with Marseille. He most notably played for Lens (five seasons) and Barcelona (four). He also played for Valencia and AS Roma. Keita represented Mali since the age of 18, appearing in seven Africa Cup of Nations tournaments and winning 102 caps. He is the nephew of Salif Keita.

LW:  Kalusha Bwalya (Zambia)
Kalusha Bwalya is regarded as the greatest Zambian footballer of all time. He played 87 times for them. He was named African Footballer of the Year in 1988.  He was Zambia's captain during the ill-fated World Cup qualifiers in 1994 when most of his teammates died in a plane crash.  He was not on the flight. He won two back-to-back Eredivisie titles with PSV Eindhoven. He also had a lengthy career playing in Mexico.
AM: Papa Camara (Guinea)
Papa Camara is regarded as one of Guinea's all-time great players, a stalwart of the highly successful Hafia FC side of the 1970s and early 1980s and a Guinean national team which was among Africa's strongest during this period. Guinea came second at the 1976 African Nations Cup, the highest place for them in history.  He also played in five African Club Championship Cup Finals, winning three of them with Hafia FC.

FW: Pierre-Emerick Aubameyang (Gabon)
He began his career at Milan, who loaned him to four French clubs before he joined Saint-Étienne permanently in 2011. After winning the 2013 Coupe de la Ligue Final, he joined Dortmund, where he has twice won the DFL-Supercup in 2013 and 2014. Despite playing once for France Under-21, Aubameyang made his senior international debut for Gabon in 2009, and has represented them at three Africa Cup of Nations tournaments and the 2012 Olympics. He is the African Player of the Year of 2015.
FW: Petit Sory (Guinea)
Born in 1945, Petit Sory finished in 3rd place in the 1972 African Footballer of the Year awards compiled by France Football magazine. On club level he played for Hafia FC in the capital Conakry, with which he won the African Champions' Cup in 1972, 1975 and 1977. He competed in the 1968 Summer Olympics for Guinea.

FW: Paul Bonga Bonga (Congo)
Paul Bonga Bonga was considered one of the first African players to make a name in Europe.  In 1956, he was spotted by European journalists while on tour in Europe.  In 1957, he joined Standard Liege in Belgium, where he had a wonderful career in the 1950's and 1960's.  He was the first African selected by World Soccer magazine as its World Best XI in 1962.
AM/FW: George Weah (Liberia)
In terms of individual awards, no other African player wins more awards than him.  He was was named FIFA World Player of the Year and won the Ballon d'Or in 1995.  He won African Footballer of the Year: 1989, 1994, 1995.  He was voted African Player of the Century in 1996.  He had great careers with AC Milan where he won two Serie A titles. He also played for Paris St Germaine and AS Monaco in France. In 2017, Weah was elected as the President of Liberia.
ST: Frederic Kanoute  (Mali)
Frederic Kanoute won two UEFA Cups while playing for Sevilla in Spain.  He was African Player of the Year in 2007.  He was capped by French youth team, but he did not received any senior callup from France. He represented Mali internationally in the senior level.  He also played in France for Lyon, in England for West Ham and Tottenham, and in China fo Beijing Guoan.

ST:  Salif Keita (Mali)
Salif Keita was voted African Footballer of the Year in 1970.  He found stardom almost everywhere he played.  His best stints were with Saint-Étienne, Marseille, Valencia and Sporting Portugal.  With AS Saint-Étienne, he won three consecutive Ligue 1 titles, including the double in 1968 and 1970. He was selected by the Confederation of African Football as one of the best 200 African football players of the last 50 years.

ST: Emmanuel Adebayor (Togo)
At the time of writing, he is playing with club İstanbul Başakşehir. He previously played for English clubs Arsenal, Manchester City, Tottenham Hotspur and Crystal Palace, as well as French sides Metz and Monaco and Spanish team Real Madrid. He was voted African Footballer of the Year for 2008. Capped 80 times for Togo. He helped Togo to qualify for the 2006 FIFA World Cup in Germany.

Squad Explanation
-- There are lack of information about players before the 1970's.  Even, the players outside the more successful African nations were relatively unknown in the 1980's.  I based my squad on a few powerful teams and modern players who found successes playing club football in Europe. I ended up with players from the same countries.
-- Mozambique had no representative, but both Eusebio and Mario Coluna were born there.  They were probably the greatest ever African born players.  Mozambique played its first game in 1975.
-- Zaire is now known as DR Congo. All players from Zaire are listed as (Zaire/DR Congo). Shabani Nonda  and Hérita Ilunga played the country when it is called DR Congo.
-- I do not really know of any great fullbacks. Fousseni Diawara (Mali) and Hérita Ilunga (DR Congo) are the most successful fulbacks playing in Europe not from the bigger and more successful African football nations. Mwepu Ilunga(Zaire/DR Congo) was known for kicking the ball away from the Brazilians at the 1974 WC Finals.  He was also a fullback, but I do not know his skill levels.
-- Bruce Grobbelaar (Zimbabwe) is probably the best known African goalkeeper before the 1990's. Kazadi Mwamba who represented Zaire at the 1974 World Cup Finals was actually a great African keeper at his time.  He won two African Nations Cup in 1968 and 1974 and once named as the Player of the Tournament in 1968.  However, Mwamba's reputation was destroyed by his performance at the WC Finals in 1974.
--  Juma Pondamali (Tanzania) and David Chabala (Zambia) and  were considered for the third keeper. I took Tommy Sylvestre (Togo) because he was selected by CAF as the greatest 200 players from Africa.
-- The midfield featured three Malian players who played around the same time.  Mahamadou Diarra, Seydou Keita and Momo Sissoko all had remarkable European careers.
-- Guinea was a powerful team in the 1970's, but I know nothing about Bengali Sylla. Petit Sory, Papa Camara and Chérif Souleymane made the squad.
-- George Weah was the obvious choices for attackers. Then, I selected a few legendary players, namely Salif Keita, Paul Bonga Bonga and Petit Sory. I mixed them up a few modern players who made big impact playing modern club football in Europe.  Salif Keita (Mali) is also one of the greatest African layer in history. Paul Bonga Bonga was an early African player playing in Europe.
-- On the left wing, Kalusha Bwalya (Zambia) is another obvious choice.
-- Frederic Kanoute and  Pierre-Emerick Aubameyang were born in France, but their birth place is not an issue.
-- Emmanuel Adebayor had a stunning career in Europe.
-- Japhet N'Doram (Chad) should have made the team.
-- Bobby Chalmers (Rhodesia/Zimbabwe) was one of the greatest player ever played in the South African league, but I do not know how to compare him with other African players.
-- In 2018, Geoffrey Kondogbia switched his eligibility from France to Central African Republic.  Let's see what he does with his career. 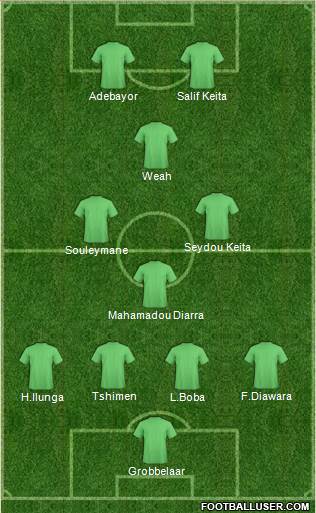