This is my all-time team for Nigeria. If there were an All-Time World Cup, this would be the 23 players I would bring to the tournament.

Nigeria first became prominence when they won the African Cup of Nations in 1980.  They reached the Final two more times in the 1980's.  Then, the national team made a great leap forward in 1990's.  The Super Eagles won the African Cup of Nations in 1994 right before the WC Finals in the US.  The team consisted of Stephen Keshi, Jay-Jay Okocha, Emmanuel Amuneke, Daniel Amokachi and Rashidi Yekini.  They reached the 2nd round of the WC Finals before narrowly losing to Italy in the round of 16.  Two years later, Nigeria fielded a similar team that won the Gold medal at the Olympics, a achievement considered to be African football's finest moment.

Born in Lagos, Peter Rufai was the starting keeper for both World Cup Finals in 1994 and 1998, where the Super Eagles made an impact.  He was the captain of the 1994 team. He was capped 62 times between 1983 and 1998.  In 1993, he scored a goal against Ethiopia during  a CAN qualifier. At the club level, he played in Nigeria, Benin, Belgium, Portugal and Spain. His longest stint was with Farense in Portugal.
GK:  Vincent Enyeama
Enyeama earned over 100 caps.  He is Nigeria's most capped player. He played in three WC Finals (2002, 2010 and 2014).  He led the Super Eagles in winning the 2013 African Nations' Cup. For club football, he won two CAF Champions' League with Enyimba before making a move to Europe.  He first played in Israel and then, to Lille in France.

GK:  Emmanuel Okala
Okala was a tall keeper.  He won the African Cup Winners' Cup with Enugu Rangers in 1978.  He was the first Nigerian to be named African Player of the Year by ASJU in 1978.   He won All African games gold medal in 1973. He was also in the team that won Nigeria’s first nations cup in 1980, but was a backup.

RB: Tony Igwe
Tony Igwe was the first Nigerian to master the overlapping wingback position.  He helped to qualify Nigeria for the 1976 Olympics in Montreal though the country withdrew due to political reasons. He represented Nigeria at the 1968 Olympics. He moved to the USA to play college soccer for University of San Franisco in 1975.


CB:  Stephen Keshi
At the time of his retirement, Stephen Keshi is the second highest cap record holder. He was one of the leaders of Nigeria World Cup team in 1994, where Nigeria reached the round of 16.  They also won the African Cup of Nations on the same year.  For domestic football, He also played club football in five countries. He played his best years in Belgium and France.   where he won the Belgian league championship with R.S.C. Anderlecht in 1991.

CB: Joseph Yobo
Yobo started his European career with Standard Liege in Belgium. His most famous stint was with Everton where he spent 8 years seasons.   He also played in Spain, Turkey and France. Yobo earned over a 100 caps and is the cap record holder for Nigeria.  He was the captain of Nigeria.  He played in three WC Finals in 2002, 2010 and 2014.

CB:  Uche Okechukwu
Uche Okechukwu was a part of the Golden Generation of the 1990's.  He went to the World Cup Finals in 1994 and the Olympics in 1996.  The highlight of his domestic club football was played in Turkey with Fenerbahçe and İstanbulspor AS. He spent 13 years playing in Turkey and is the longest serving foreign player in Turkey.

CB:  Christian Chukwu
Born in 1951, Christian Chukwu is considered one of Nigeria's greatest defender.  He captained Nigeria's first ever African Cup of Nations win in 1980, beating Algeria in the Final.  The victory was a milestone for football in Nigeria. For hos domestic career, he played for Enugu Rangers at home, where he was also the captain.

CB: Godwin Achebe
Godwin Achebe is the youngest ever captain for the Super Eagles. He was a 18 years old.  He played for Nigeria from 1960 to 1974.  His first match was in 1960 againts Ghana. His national team career, however, was interrupted by the civil war.  For club football, he played for Enugu Rangers.

LB: Taribo West
Taribo West represented the Nigerian national team in the 1998 and 2002 FIFA World Cups.  He was also a member of the Nigerian team that won the gold medal at the 1996 Summer Olympics. He also played club football in five countries, most notably Belgium, where he won the Belgian league championship with R.S.C. Anderlecht in 1991. From 1993 to 1997, he played AJ Auxerre in France.  He spent two seasons with Inter Milan, where he won the UEFA Cup in 1998.
LB: Celestine Babayaro
Celestine Babayaro was best remembered for his 8 seasons with Chelsea FC between 1997 and 2005.  They won the Cup Winners' Cup in 1998.  He also played for Anderlecht and Newcastle United.  For Nigeria, he won a Gold Medal at the 1996 Olympics and made the all-tournament team.  He also represented Nigeria at the World Cup Finals in 1998 and 2002. He had 27 caps between 1995 and 2004.

CM:  Sunday Oliseh
Sunday Oliseh was a member of the Golden Generation in the 1990's.  He won the Gold Medal at Atlanta 1996 and appeared in the World Cup Finals in 1994 and 1998.  He scored the winning goal against Spain in 1998. For his club career, he played for many clubs, including stints with Ajax Amsterdam, FC Koln, Juventus, Borussia Dortmund, Bochum, Genk, etc.

CM:  Muda Lawal
Muda Lawal is the only player ever to appear at five consecutive African Nation Cup final rounds (1976-1984), winning the edition in 1980 and it was Nigeria's first ever victory in the tournament. At home, he played for Shooting Stars FC, where he won the African Cup Winners' Cup in 1976. His club was disbanded for a few years.  The Ashero Stadium in his hometown Abeokuta was named after him upon hi

AM: Jay-Jay Okocha
Jay-Jay Okocha is widely considered to be one of Nigeria's greatest footballers. In 2007 Jay-Jay Okocha was voted number 12 on the greatest African footballers of the past 50 years by CAF.  He was Nigeria Player of the Year in 1995, 1997, 2000, 2002, 2003, 2004 and 2005.  He played in three World Cup Finals(1994, 1998, 2002) and won an Olympic Gold medal in 1996.  At the club level, he played for Fenerbahçe, Eintracht Frankfurt, PSG, Bolton Wanderers and Hull City.
RW/FW:  Segun Odegbami
Nicknamed "Mathematical",  Segun Odegbami is regarded as one of the greatest Nigerian players of all-time.  He won the African Cup of nations in 1980 and he scored two goals in the Final. Because of that, he was the runner-up for the African Player of the Year award the same year. He also won the 1976 African Cup Winners Cup with Shooting Stars.
FW:  Victor Ikpeba
Victor Ikpeba had 31 caps for the Super Eagles. He was African Player of the Year in 1997 because his performance for AS Monaco.   He was a member of the Golden Generation in the 1990's.  He won the Gold Medal at Atlanta 1996 and appeared in the World Cup Finals in 1994 and 1998.  He had a great career with Monaco playing under Arsène Wenger, but his career was not the same after Monaco.  He also played for Borussia Dortmund, Real Betis, etc.

FW: Nwankwo Kanu
Nwankwo Kanu was voted as Nigeria's greatest player.  He captained Nigeria's Gold Medal team at the 1996 Summer Olympics in Atlanta.  He was African Player of the Year in 1996 and 1999.  He was a member of Ajax that won the 1995 Champions' League and considered one of the greatest club sides in history.  Because of a heart condition, his career in Italy was interrupted and joined Arsenal in 1999, where he enjoyed 6 great seasons and won two Premiership.
ST: Aiyegbeni Yakubu
Aiyegbeni Yakubu was best remembered for his 11 seasons playing in England scoring over 130 goals.  During his time in England, he played for Portsmouth, Middlesbrough, Everton, and Blackburn Rovers.  He is the second highest African goalscorer in Premier League history with 96 goals. He also played club football in Israel, China, Qatar and Turkey.  For Nigeria, he was capped 57 times, but he was not selected for the 2002 World Cup Finals.  He only played in a single World Cup Finals in 2010.

ST:  Daniel Amokachi
Daniel Amokachi was a member of the Golden Generation in the 1990's.  He came third in the African Player of the Year award three times. He won the Gold Medal at Atlanta 1996 and appeared in the World Cup Finals in 1994 and 1998.  He earned a big move to Everton after the World Cup in 1994.  His club career was, however, marked with injuries.  He also played for Club Brugge and Beşiktaş J.K.

ST:  Rashidi Yekini
Rashidi Yekini shared the African Player of the Year with Abedi Pele in 1993. He scored Nigeria's first ever World Cup goal in 1994.  He scored 37 goals in 58 appearance for the national team, playing in the Golden Generation in the 1990's. His professional career, which spanned more than two decades, was mainly associated with Vitória de Setúbal in Portugal, but he also played in seven other countries, including Gateway United FC in Nigeria. In Portugal, he won the Bola de Prata in 1994. He died in 2011 at the age of 48.

Squad Explanation
-- The squad was full of players from the African Cup of Nations winners in 1980 and the Golden Generation of the 1990's. Only six players are not from the two eras. Tony Igwe, Godwin Achebe, Aiyegbeni Yakubu, Joseph Yobo and Vincent Enyeama.
-- Four players were selected from the 1980 African Cup of Nations.  They are Emmanuel Okala, Segun Odegbami, Christian Chukwu and Muda Lawal.  The 1980 team opened the door for future generation.
-- Only two of the 2013 African Cup of Nations winning team were selected. They are Joseph Yobo and Vincent Enyeama.
-- A large contingent is from the 1990's Golden Generation.
-- From the 1996 Olympics Gold medal winning team, I selected the following: Jay Jay Okacha, Taribo West, Nwankwo Kanu, Victor Ikeba, Celestine Babayaro, Emmanuel Amunike, Uche Okechukwu and Daniel Amokachi.
-- Ben Iroha, Peter Rufai, Finidi George, Stephen Keshi and Rashidi Yekini are also from that Golden Generation from the 1990's, but did not attend the 1996 Olympic Games in Atlanta.
-- Rashidi Yekini was Nigeria's first ever winner of the African Player of the Year.  The other winners are Emmanuel Amunike, Nwankwo Kanu and Victor Ikpeba.   Jay-Jay Okocha who is considered among Africa's greatest playmaker never won it.
-- Victor Ikpeba might be overrated, but he won the African Player of the Year.  His career was based upon of his successes with AS Monaco.  I slightly biased because I watched plenty of him at Borussia Dortmund.
-- Segun Odegbami never played club football outside of Africa, but his contributions to Nigeria were great.
-- I have a blog post about Michael Emenalo.
-- Tony Igwe and I might have crossed path while I was in California.
-- Victor Moses, John Obi Mikel and Obafemi Martins have name recognition, but I selected players from the Golden Generation over them because those players had brought glory to Nigeria.  However, John Obi Mikel would one day earn a spot on the team, but he had Sunday Oliseh and Muda Lawal ahead of him.
-- Muda Lawal played in many African Nations Cup.  I selected him for his historical role over John Obi Mikel.
-- Liked Obafemi Martins, Yakubu was not from the Golden Generation.  His career with Everton was more steady than Martins. He is the second highest African goalscorer in Premier League history with 96 goals.  Martins played well with Inter Milan, but his career faded quickly after that.
-- Joseph Yobo established himself at the English Preimership while Ben Iroha played at lower level.
-- I ranked Taye Taiwo, Taribo West and Celestine Babayaro almost the same.  I am more familiar with the latter two. 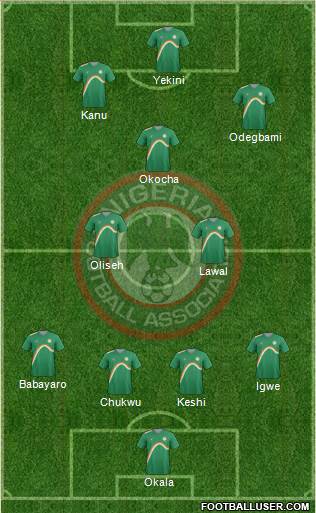