Saudi Arabia made an international breakout in 1984 when they won the Asian Cup.  Abdullah Majed was their star player.  From 1984 onward, the Saudis became a power in Asia.  They won two out of the next three Asian Cups.  In 1994, they qualified for their first World Cup Finals.  They beat Morocco in the first ever World Cup match between Arab countries. And then, Saeed Al-Owairan scored one of the best goals of the tournament against Belgium  as Saudi Arabia advanced to the second round.   Saudi Arabia would qualify for the next three World Cup Finals.  However, they were unable to match the results of USA 1994.

If there were an All-Time World Cup, this would be the 23 players I would bring to the tournament.

Team
GK: Mohamed Al Deayea
Al-Deayea has split his professional career between the clubs Al-Ta'ee and Al-Hilal in Saudi Arabia.  He played in four FIFA World Cups for the Saudi Arabia national team and earned a total of 178 officially recognized caps, the record for a goalkeeper. He is widely recognised as the greatest goalkeeper from the Persian Gulf. Originally he started as a handball player, but was convinced by his club and his older brother Abdullah to become a footballer.
GK:  Abdullah Al-Deayea
Abdullah Al-Deayea is the elder brother of Mohamed Al Deayea, another Saudi goalkeeper. He played 57 times for Saudi Arabia.  He was the starting keeper for Saudi Arabia's Asian Cup winning team in 1984 and 1988.  He was voted the best keeper in the 1984 Asian Cup.  His club career was spent with Al-Ta'e and Al-Hilal FC between 1979 and 1997.

CB: Saleh Nu'eimeh
Saleh Nu'eimeh was capped 150 times by Saudi Arabia.  He is widely considered the greatest Saudi defender of all-time.  He earned over 150 caps.  He played in the 1984 Asian Cup, and was named in the all-star team after the 1988 AFC Asian Cup.  Saudi Arabia won both tournaments. At home, he played club football for Al-Hilal FC.

CB: Hamad Al-Montashari
Hamad Al-Montashari won the Asian player of the Year in 2005 for Al attiha's victory at the Asian Champions' League.  He won back-to-back Asian Champions' League in 2004 and 2005 with Al Ittiha. He is considered to be one of Ittihad's longest tenured players. From 2002 and 2011, he played 54 times for Saudi Arabia. He went to the World Cup Finals in 2006, and the Asian Cup in 2004 and 2011.

CB:  Abdullah Zubromawi
Between 1993 and 2002, Abdullah Zubromawi played 142 times for the Saudi national team.  He went to three World Cup Finals in 1994, 1998 and 2002.   In addition, he also represented Saudi Arabia at the 1996 Olympic Summer Games, and three Confederation Cup.  At the club level, he played mostly for Al-Ahli, Al-Hilal and Damac FC in his home country.

LB:  Hussein Sulaimani
Hussein Sulaimani made 109 appearances for Saudi Arabia.  He was a part of the team that won 1996 AFC Asian Cup at the age of 19. He was selected to 1998, 2002 and 2006 World Cups.  He became the third Saudian footballer in history to play in Europe when he moved to Neuchâtel Xamax. In 2009, he returned to Saudi Arabia to play for Al-Nassr.

RW: Yussef Al-Thunayan
Al-Thunayyan was nicknamed "The Philosopher". He is considered among the greatest Saudi players.  He was capped 95 times, winning two Asian Cups in 1988 and 1996.  He played his entire club career for Al-Hilal, joining the first team in 1984 and retiring in 2005. With Al-Hilal, he won the Asian Club Championship in 1992 and 2000. He went to the World Cup Finals in 1998, held in France.

LW: Mohammad Al-Shalhoub
At the time of writing, Mohammad Al-Shalhoub is capped 117 times for Saudi Arabia.  He made his debut as a 20 years old in 2000. He was voted third at the Asian player of the Year in 2006. For his club career, he played his entire club career for Al-Hilal. With Al-Hilal, he won the Asian Club Championship in 2000, Asian Cup Winners Cup in 2002 and 7 Saudi league titles. He went to Germany for the World Cup Finals in 2006.

FW/RW: Fahad Al-Ghesheyan
Fahad Al-Ghesheyan is the first Saudi player to play in Europe when he moved to AZ Alkmaar in 1998.   He started his career with Al-Hilal, but was sold to its rival, Al-Nassr.  He was unhappy with the move and retired after a season.  He was only 25 years old. He went to USA 1994, scoring a goal against Sweden.

FW:  Saeed Al-Owairan
Saeed Al-Owairan scored the famous goal against Belgium at the World Cup in 1994, which was probably one of the best goals ever scored in a World Cup Finals.  That year, he became the Asian Player of the Year.  He earned 74 caps for Saudi Arabia. Owairan spent his entire club career at Al-Shabab, a Saudi club based in Riyadh.   In 1996,  he was caught drinking alcohol and socializing with women during Ramadan by the Saudi police. He was given a prison sentence and suspended from competitive football for one year.
FW: Mohammed Noor
Mohammed Noor was capped 94 times and played in both 2002 and 2006 World Cup Finals.  He found successes with club football, where he was a key player with Al-Ittihad that won the Asian Champions' League in 2004 and 2005. He spent a season with Al-Nasr because of financial situation with Al-Ittihad.

ST: Yasser Al-Qahtani
At the time of writing, Yasser Al-Qahtani has scored 59 goals for the national team. He is the Asian player of the Year in  2007 after he finished as the top scorer at the Asian Cup.  He spent his club career mainly with Al-Hilal, reaching the Final of the AFC Champions' League twice. He also played in UAE for a season on a loan deal.

ST:  Abdullah Majed
Abdullah Majed was considered the greatest player from West Asia.  He won Asian Footballer of the Year three times in 1984, 1985 and 1986. He won the Arabian Player of the Century by Al-Jazeera Channel. He earned 116 caps between 1977 and 1994.  He won the Asian Cup twice in 1984 and 1988.  He  played for Al-Nassr for more than 20 years scoring 320 goals making him Al-Nassr greatest player ever.  He was the captain of the World Cup team in 1994.
Squad Explanation
-- Abdullah Majed and Mohamad Al-Deayea are automatic selection.  I admitted not knowing if other player should consider as automatic selection.
-- I do not know much about football in Saudi Arabia before the Asian Cup in 1984.This team mainly consists of players from the 1980's onward.   In general, I only heard of three to four players before my research.  I do not know much about Saudi football after the completion of this team in 2014.
-- The world first noticed Saudi Arabia when they won the 1984 Asian Cup.  Abdullah Majed and goalkeeper Abdullah Al-Deayea made my my all-time team.
-- Saudi Arabia also has the best result in a World Cup Finals.  They advanced to the second round.  I have twelve members of the 1994 team on this all-time team.  They are Abdullah Majed, Sami Al Jaber, Fahad Al-Ghesheyan, Khaled Al-Muwallid, Fahad Al-Bishi, Fuad Anwar Amin, Mohamed Al-Jawad, Ahmad Jamil Madani, Abdullah Zubromawi, Mohammed Al-Khilaiwi, Abdullah Al-Dosari and Mohamed Al Deayea.  Abdullah Majed was 34 years old while Mohamed Al Deayea and Sami Al Jaber were 21 years old.  Both Mohamad Al-Deayea and Sami Jaber would play in the next three World Cup Finals.
-- Saudi players won the Asian Player of the Year 8 times. Majed Abdullah (3 times), Saeed Owairan, Nawaf Al-Temyat, Hamad Al-Montashari, Yasser Al-Qahtani and Nasser Al-Shamrani all won the award.
-- Mohamad Al-Deayea is widely recognised as the greatest goalkeeper from the Persian Gulf. He was voted Goalkeeper of the Century in Asia. His older brother Abdullah also made this all-time team. He was the Goalkeeper of the Tournament at the 1984 Asian Cup.
-- Saleh Nu'eimeh is widely considered to be Saudi greatest defender.  He played in the 1980's.  Hamad Al-Montashari won the Asian player of the Year in 2005 as a centerback.
-- Football fans might remembered Zinedine Zidane's unsportmanlike conduct against Fuad Anwar Amin at the 1998 World Cup Finals.

-- Saeed Al-Owairan is probably the most famous Saudi player because of his goal against Belgium at the World Cup Finals in 1994.  The goal sent the Saudis to the second round of the World Cup Finals.  It was later voted the 6th best in FIFA's Goal of the Century rankings.  The goal can be seen here.
-- Nawaf Al-Temyat was Asian Player of the Year, Arab Player of the Year and Saudi Player of the Year in 2000.
-- I watched a lot of Sami Al Jaber.  I might have overrated him. I am surprised that he was never Asian Player of the Year.  He went to four World Cup Finals, which is a record for Arab players.
-- Abdullah Majed is largely considered the greatest ever player from Saudi Arabia. He led Saudi Arabia in winning the 1984 Asian Cup.  He won Asian Footballer of the Year three times in 1984, 1985 and 1986. He won the Arabian Player of the Century by Al-Jazeera Channel.
-- Liked players from other Persian Gulf countries, Saudi players do not play aboard.  In fact, they always stayed with Saudi clubs.   Fahad Al-Ghesheyan and Sami Al Jaber played briefly in Europe. 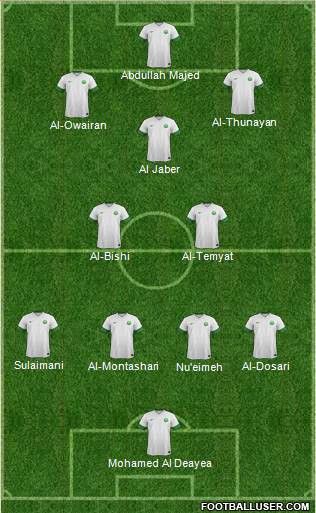