South Korea is a power in Asia since the 1950's.  They won two Asian Cup in 1956 and 1960.  They were  the second Asian country to participate in a World Cup Finals when they went to Switzerland in 1954.  However, they would not go to another WC Finals until 1986.  Led by Asia's greatest modern player Cha Bum Ku, South Korea only managed a draw with Bulgaria in 1986. However, they would go on to qualify for the 8 straight WC Finals.  In 2002, they beat Poland, Portugal, Italy and Spain en route to the semifinal of the WC Finals held at home.  This remained the best ever result by a country outside South America and Europe since the United States in the 1930.

Team
GK:  Lee Woon-Jae 이운재
Lee Woon-Jae was a part of four World Cup Finals.  His best tournament was in 2002 where South Korea reached the semifinal and he was inspirational as he saved a penalty in the penalty shootout of the quarterfinal win vs Spain.  He is one of seven players from Asia to play in four different World Cups.   Chunnam Dragons in the K-League.

GK: Kim Byung-ji 김병지
Throughout his career, Kim Byung-ji was locked up with the battle for number 1 with Lee Woon-Jaae. He went to the France 1998 and Korea/Japan 2002 as a backup.  He was selected as the best keepers in the K-League for a record 4 times.  He played over 700 games in the league. His club career lasted 24 years in the K-League.  He is the oldest ever player in the league.

RB: Kim Ho-kon 김호곤
Kim Ho-kon played Yonsei University, but most of his entire career with Seoul Trust Bank. He represented South Korea from 1971 to 1979. He was voted as the greatest rightback in Asian history by AFC.  He was also Korea Football Association Footballer of the Year in 1975.  He became a coach after retiring from playing.

CB:  Hong Myung-bo 홍명보
Hong Myung-bo is the all-time cap record holder for South Korea.  He played in 4 World Cup Finals.  In 2002, he captained South Korea to reach the Worl Cup semifinal, where he won the Bronze Ball.  He is probably the greatest defender in Asian history.  At the club level, he played mainly for Pohang Steelers in the K League, Bellmare Hiratsuka and Kashiwa Reysol in Japan and, LA Galaxy in USA's Major League Soccer.
CB: Kim Ho 김호
Kim Ho was Korean Player of the Year in 1969.  He represented South Korea from 1965 to 1973. He played in the Asian Cup in 1972.  He was an amateur player with Cheil Industries FC and a founding member of Commercial Back of Korea FC.  As a coach, he led the Korean national at the 1994 World Cup Finals in the USA.


CB: Kim Jung-nam 김정남
Kim Jung-nam played for South Korea from 1962 to 1971.  He was named Korean Player of the Year in 1971. He competed for South Korea at the 1964 Summer Olympics.  He played for Yangzee FC and Korea Exchange Bank FC. His two brothers Kim Sung-nam and Kim Kang-nam also represented Korea.
CB: Chung Yong-hwan 정용환
Chung Yong-hwan played his entire career with Daewoo Royals in South Korea between 1984 and 1994, where he won the AFC Champions' League(formerly known as  Asian Club Championship) in 1986 and then, Afro-Asian Club Championship.  At the international level, he represented Korea at the 1986 World Cup, 1990 World Cup, 1984 Asian Cup and 1988 Asian Cup.  He had 85 caps between 1983 and 1993.

LB:  Lee Young-Pyo 이영표
At the club level, Lee Young-Pyo enjoyed one of the most successful career for an Asian playing in Europe.  He was a starter with PSV Eindhoven and Tottenham Hotspurs.  Lee started his professional career at FC Seoul, then known as Anyang LG Cheetahs in the Korean K League 1 in 2000. He also spent time in Saudi Arabia and the MLS. He played 127 times between 1999 and 2011 for South Korea.  He went to three World Cup Finals.

DM: Kim Nam-Il  김남일
He was a relatively unknown player before the WC in 2002.  He made a name for himself at the Korea/Japan 2002 after Guus Hiddink transformed him into a defensive midfielder.  He also went to the WC Finals in 2006 and 2010.  For his club career, he had played in Holland, Russia and Japan. In Korea, he played for Chunnam Dragons and Suwon Bluewings.

CM: Kim Joo Sung 김주성
From 1988 to 1990,  Kim Joo Sung won three straight Asian Player of the Year.  He was known for his long hair during his career, and was an Asian football icon in the early 1990's.  He played in three World Cup Finals in 1986, 1990 and 1994.  For his club career, he played for Chosun University and Busan Daewoo Royals at home. Later, he spent two seasons with Vfl Bochum in Germany. He was capped 76 times for South Korea.
CM: Noh Jung Yoon 노정윤
He was the first Korean player to play in the J. League when he moved to Sanfrecce Hiroshima in 1992.  He almost spent his entire career playing in Japan, with a brief career in Holland.  He played for Sanfrecce Hiroshima, NAC Breda, Cerezo Osaka, and Avispa Fukuoka. At home, he played for Busan Icons and Ulsan Hyundai. He represented Korea at the USA 1994 and France 1998.

CM: Huh Jung-Moo 허정무
Huh Jung-Moo was one of the first South Korean players to play in Europe.  He joined PSV Eindhoven in 1980 and stayed there until 1983.  At home, he played for Hyundai Horangi.  He was capped 101 times from 1974 to 1986. He played in the 1986 World Cup Finals in Mexico.  He was ever immortalised by a picture of him playing against Diego Maradona in the first round of that Finals

LW: Son Heung-min 손흥민
Son finished his development at Hamburger SV, where he made his debut in the German Bundesliga in 2010. In 2013, he moved to Bayer Leverkusen for a club record €10 million, and played for the club in the Europa League and Champions League. Two years later, he signed for Tottenham for £22 million, becoming the most expensive Asian player in history. While at Tottenham, he became the top Asian goalscorer in Premier League history.
FW: Park Lee-chun 박이천

Park Lee-chun helped Korea to finish second at the 1972 Asian Cup and then, won the Korean Player of the Year in the same year.  He played for Kookmin Bank FC.  He turned professional in 1974 when he joined the Hong Kong league between 1976 and 1980, playing for Sea Bee and South China.

FW: Hwang Sun-Hong 황선홍
Hwang Sun-Hong was one of the most important Korean player between 1988 and 2002.  He played in 4 WC Finals.  For club football, he started with 2. Bundesliga outfit Wuppertaler SV during the season of 1992–93. He played in Pohang Steelers for six seasons and became a club legend. In 1998, he won Asian Club Championship with the Steelers. He also played in J League with Cerezo Osaka in 1999 with 24 goals in 25 matches, making him the top scorer in the J1 League charts.


FW: Choi Soon-ho 최순호
Choi Soon-ho was a star in the 1980's.  He was capped 97 times.  He played in the 1986 and 1990 World Cup Finals.  He was the Asian Cup top-scorer in 1980, the youngest ever top-scorer at the age of 18.  He played mainly in Korea, but spent a season in France, playing for Rodez AF.
ST:  Cha Bum Kun 차범근
Cha Bum Kun is probably the greatest Asian player in the modern era.  He won two UEFA Cups, one each for Eintracht Frankfurt and Bayer Leverkusen. he also played for Air Force in South Korea and SV Darmstadt 98. He was widely considered one of the best forwards in the Bundesliga throughout his career. He became the third-highest-paid footballer in Germany while playing there. For the national team, he had 135 caps and went to Mexico 1986.
ST: Choi Yong-Soo 최용수
Choi Yong-Soo earned over 60 caps between 1995 to 2003. He represented South Korea at the 1996 Summer Olympics, 1998 World Cup, and 2002 World Cup.  For his club career, he played in both Japan and Korea. He is considered a club legend at LG Cheetahs / Anyang LG Cheetahs(now called Seoul FC). From 2001 to 2005, he played in Japan for JEF United Ichihara, Kyoto Sanga FC and Júbilo Iwata.
Honorable Mention

--  Cha Bum Kun is the greatest Korean player ever and perhaps, the greatest Asian player.  He won two UEFA Cups.  He is an automatic selection.  His son Cha Du-ri is on my honorable mention.  Hong Myung-bo, Park Ji-Sung, Lee Woon-Jae and Son Heung-min are probably automatic selections.
-- South Korea advanced the semifinal of the 2002 World Cup Finals.  Lee Woon-Jae, Hwang Sun-hong, Choi Yong-Soo, Park Ji-Sung, Yoo Sang-Chul, Kim Nam-Il, Yoo Sang-Chul, Lee Young-pyo, Kim Tae-young, Hong Myung-bo and Kim Byung-ji were selected into my team.
-- I could not find much information on Korean players in the 1960's, where they dominated Asian football. So I do not think my team is the best of South Korean football.
-- Football fans around the world would remember goalkeeper Lee Woon-Jae's performance at the 2002 World Cup Finals.  He stood out during the penalty shootout win against Spain in the quarterfinal.
-- Lee Young-Pyo has a stunning career with Tottenham Hotspurs.  His peak there was however short.
-- Cho Young-jeung played in the NASL with Portland Timbers during the 1980's. He was NASL Team of the Year in 1982 and Korean Player of the Year in 1977.  Certainly, he had a career in the highest level at the time, but I do not know how to rank him among the other Korean centerbacks.  So I only put him as honourable mention.
-- Hong Myung-bo is the all-time cap record holder for South Korea. He is probably the greatest centerback from Asia.
-- Kim Jung-nam and Kim Ho were known for their centerback partnership.  I reunited them on my all-time team.
-- Ko Jeong-woon has one of the most powerful free-kick in the world.
-- Ahn Jung Hwan was an icon of his time after he played in Italy as well as scoring the winning goal against Italy in the 2002 World Cup Finals, but I went for the older players.  I also have Cha Bum Kun, Choi Yong-Soo and Hwang Sun-Hong ahead of him. He is the best known player not selected for this all-time team.
-- From 1988 to 1990,  Kim Joo Sung won three straight Asian Player of the Year. In 1990, he was billed a potential star at the World Cup Finals, but he did not do well in the Finals.  Nevertheless, he made the team.  Noh Jung Yoon played around the same time.  He was very underrated as compared to Kim Joo Sung.
-- Son Heung-min is still young, but he has done more playing in club football than most Korean players. He is now a main player at Tottenham Hotspurs.
-- Park Ji-Sung is the greatest Asian player ever played in the English Premiership.  He spent 7 seasons with Manchester United, often as a player off the bench. I have not seriously compared the careers of Son Heung-min against that of Park Ji-sung.
-- Park Lee-chun's move to the professional league in Hong Kong was considered a big move in that era. Kim Jae-han and Byun Ho-young also played  there.  All three players won South Korean Player of the Year.  Park Lee-chun made the all-time team while the other two were put into honourable mention.
-- Seol Ki-hyeon deserved a spot. He lost his space after the emerge of Son Heung-min.
-- Ki Sung-yueng might have a chance to be on this team. 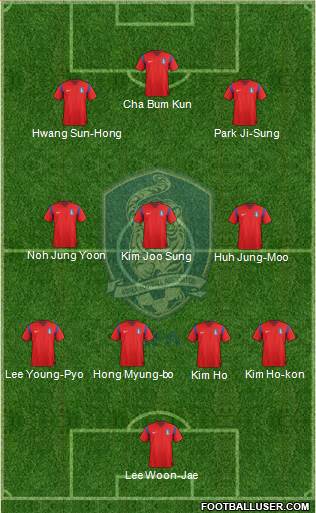