The Argentina-Colombia game on September 5th, 1993 went down as one of the biggest surprised results of the 1990's.  The game was the last game of the Group A of CONMEBOL's World Cup Qualifiers.  On the standing, Colombia led Argentina by a single point.  They had already clinched a continental playoff spot against Australia.  They had also beaten Argentina 2-1 less than a month ago at home.  The match ended Argentina's 33 matches unbeaten run.  Meanwhile, Argentina was two points ahead of Paraguay.  However, the September 5th match would be played in Buenos Aires.  Argentina won the last two Copa Americas.  No one thought Colombia could beat Argentina..... not by 5 goals.  Diego Maradona who made his return to the national team earlier in the year did not play in the match, but he made a controversial comment on TV before the game.   “The Colombians have to know that Argentina is always up here,” his right hand pointing to his head, before plunging downwards to his chest, “and the Colombians down here”.

With Maradona sitting in the stand, the home team started well.   Gabriel Batistuta was causing a lot of problems for Colombia.  Then, on the 41st minute, Carlos Valderama sent a through ball to Freddy Rincon and he beat Goycochea for the first goal.  The goal was very similar to the one Freddy Rincon scored against West Germany at the World Cup Finals in 1990.  The floodgate had opened.  Rincon would add one more goal in the second half, Faustino Asprilla would score two more and Adolf Valencia one more.  It was Argentina's darkest day in football. 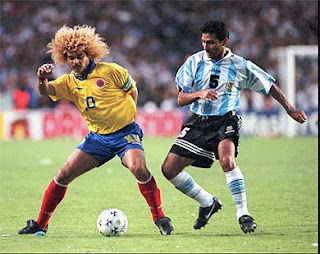 On the next day, The most important sports magazine of Argentina, El Gráfico, posted a completely black cover on its frontage  with the only legend: "Shame".  Colombia suddenly became the favourite of the WC Finals in 1994. Perhaps, the result led to false expectations and their WC campaign was disastrous. 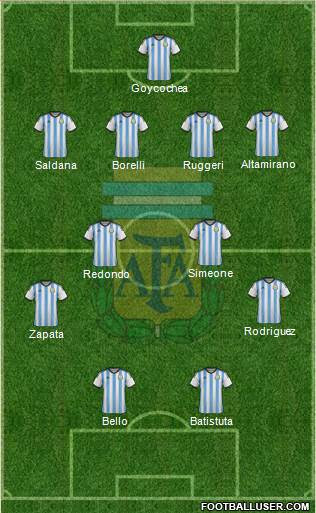 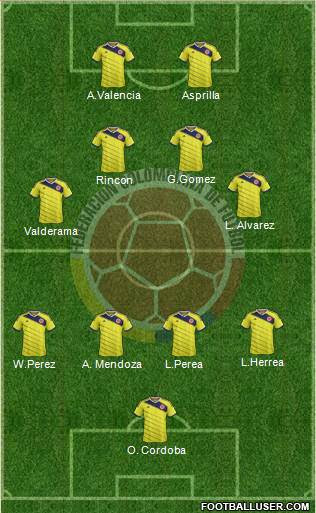 Please also see my All-Time World Cup Team Index.
Posted by Soccer, football or whatever at 5:32:00 AM No comments:

In 1960, Eusebio was discovered by Brazil international footballer Bauer who wanted him to join Sao Paulo, but Sao Paulo did not want to buy him. What if he went to Brazil? Again, I do not know Brazilian immigration law in 1960.  According to the modern Brazilian law, he could become a Brazilian citizen in 4 years. He would have been eligible to play for Brazil by 1964.

Note: Mozambique did not play its first game until 1975 when it became independence.

Question marks?
-- I don't know if Brazil would cap a foreign-born player in 1964.  Portuguese-born Casemiro do Amaral played 6 times for Brazil between 1916 and 1917 while Sidney Pullen who was born in England played for Brazil around the same time. Then, Italian-born Francisco Police played for Brazil in 1918.  Russo "Adolpho Milman" played once for Brazil in 1942.  His birthplace is still a question mark, but he was definitely not born in Brazil.  Finally, Andreas Pereira was capped by Brazil in 2018.

Eusebio with Brazil in 1966
-- But imagine Brazil with Garrincha, Pele, Eusebio?
-- Can Brazil win the World Cup in 1966 with Eusebio? Portugal and Brazil fought an epic march in the 1966 World Cup Finals.  Eusebio had a legendary performance.  Pele was injured during the march and the two-time defending champion Brazil was eliminated.  Portugal later advanced all the way to the semi-final before being eliminated by England.  While Brazil was talented in 1966, I actually believed Portugal had a better supporting cast for Eusebio in 1966.  Pele was injured on the first game while playing against Bulgaria.  He did not play against Hungary, in which Brazil also lost.  Garrincha was 32 years old in 1966.  DJ Santos was 37.  Meanwhile, Portugal also featured Mario Coluna, António Simões, Germano, Jose Torres and Jose Augusto.  Eusebio probably would have a better team with Portugal.

How about Eusebio in 1970?
-- Portugal failed to qualify for the World Cup Finals.  In fact, they finished last in their Qualifying group behind Romania, Greece and Switzerland.
-- Brazil of the 1970 World Cup team is known as one of the greatest teams in World Cup history.  They played the most beautiful football ever.  It was a team full of playmakers.  Eusebio would have replaced Tostão on the line-up.  Tostão was playing the number 9 position.  In actuality, he was a "false 9".  Brazil's winning formula in 1970 was about him moving around so that Pele and Jairzinho could score.  Without Tostão, the team probably would lose an important element.

Formation
I doubt that Eusebio would be effective as a false 9.  So he is playing a classic 9 with Pele playing as a support striker. 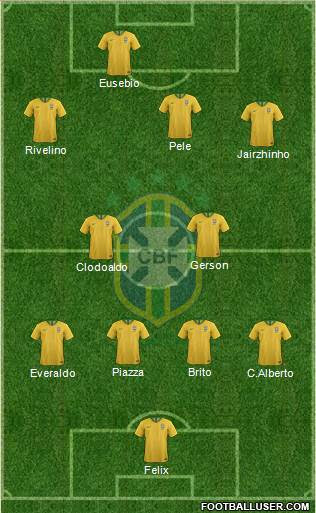 What if Eusebio became Italian?
How about Eusebio playing for Italy? In 1957, Juventus discovered Eusebio when he was 15 years. Eusebio's mother did not want his son to move to Italy. What if he headed over to Italy?

Question marks?
-- I don't know the Italian law in 1957. He was not an Italian so he could not become an "oriundo". Let's assume that he became an Italian citizen around 1962. What would happen?

-- Would the Italians select a Black player to their national team in 1960's? Italy did not cap a Black player until 2001.
-- Imagine Italy with Riveria, Mozzola, Facchetti, Zoff, Riva and Eusebio throughout the 1960's?
-- Serie A banned foreign players by 1964. What would happen to Eusebio?

Posted by Soccer, football or whatever at 2:08:00 AM No comments: 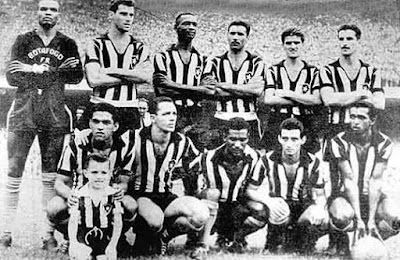 Botafogo de Futebol e Regatas was actually the merge of two football clubs, Club de Regatas Botafogo and the Botafogo Football Club, in 1942.  Finally, they found successes by winning the Campeonato Carioca in 1948.  That team included a young talent named Nilton Santos. In  1953, Garrincha joined the club as a very, raw talent.  According to legend, he nutmegged on Nilton Santos on his trial match.  From 1955 to 1964, Botafogo enjoyed one of its greatest period. The team consisted of Quarentinha, Paulo Valentim, Didi (bought from Fluminense), Tome, Pampolini and others.

In 1957, João Saldanha became their coach.  They won the Campeonato Carioca in 1958.  They beat Fluminense 6-2.  Paulo Valentime scored 5 goals.  In 1961, they would win again.  This time, the team was reinforced by Mario Pagallo and Amarillo.  Then, in 1962, they repeated their successes in the Campeonato Carioca and  also won the Rio-Sao Paulo Championship(Torneio Rio-Saulo) for the first time.

In 1963, Botafogo had a historical series of matches against Pele's Santos.  At the Final of Taca Brazil, Santos beat Botafogo 4-3 on the first game, but Botafogo won the second match by 3-1, which forced a decisive third match.  Santos easily took apart Botafogo 5-0. A few months later, Santos and Botafogo would meet again at the Copa Libertadores.  The first leg need in a 1-1 draw, but Santos beat them again in the 2nd leg.  Santo went on to become champion.  The epic battles defined an era in Brazilian football.  The rivalry became legendary.

In 1964, Botafogo was again crowned the champion of Rio-Sao Paulo Championship.  They beat Santos 3-2 on the first leg, but the Brazilian FA decided to cancel the rest of the series and reward bot teams co-champions, despite Botafogo winning the first and only match of the series.  After 1964, new players such as Gerson and Jairzinho emerged.  They would eventually replace Didi and Garrincha.  The new Botafogo continued their successes by winning another Rio-San Paulo Championship in 1966, two Campeonato Cariocas in 1967 and 1968 and one Brazil Cup in 1968. Mario Zagello would coach them.

The Botafogo team of Manga, Nilton Santos, Zagallo, Didi, Quarentinha, Amarildo and Garrincha was one of the best teams in the history of world football.

Posted by Soccer, football or whatever at 6:04:00 AM No comments: