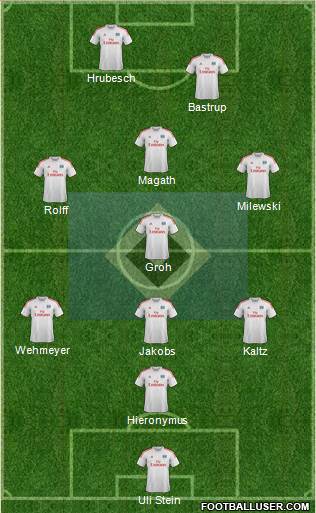 The English clubs had won 6 straight European Cups before the  European Cup final in 1983.  When Juventus reached the Final and none of the English clubs did, it looked as if the changing of guard in European football was inevitable.  In 1981, Serie A lifted its ban on foreign players.  International players flocked to play in Italy.   A year later, Italy won their third World Cups in 1982.  The 1982-1983 season was probably the beginning of a Golden era in Serie A.  However, Hamburger SVwould not allow it to happen.  It pulled one of the bigger upsets in European Cup history by beating Juventus in the Final.   On paper, Juventus was the clear favorite.   Juventus fielded six World Cup winners, Dino Zoff, Claudio Gentile, Gaetano Scirea, Marco Tardelli, Antonio Cabrini and Paulo Rossi.   Michel Platini and Zbigniew Boniek were one of the best players at the World Cup.

However, Hamburger SV was not a pushover. They were having a Golden era of its own.  They won the Cup Winner's Cup in 1977 by beating Anderlecht. They reached the 1980 European Cup Final with Kevin Keegan, but lost to Brian Clough's Nottingham Forest.  In the semi-final, they destroyed Real Madrid 5-1 at home on the second leg.  Then, in 1982, they reached the Final of the UEFA Cup, but lost again.  At the time of the 1983 European Cup Final, they won two of the last three Bundesliga title(they would win the 1982-1983 title too).  They also went undefeated in league from the January of 1982 to the January of 1983.  Felix Magath, Manfred Kaltz and Horst Hrubesch who went to the WC Finals in Spain were the biggest names on the team.  Their manager Ernest Happel had already won a European Cup with Feyenoord and considered a very good manager.  Jimmy Hartwig who was one of the first Black players to be capped by West Germany was missing because of suspension.   Franz Beckenbauer left the club the season before. 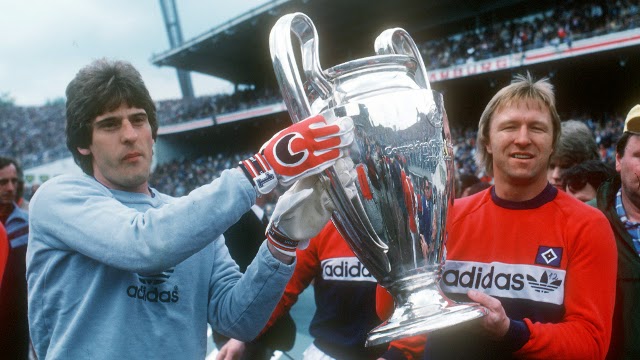 Manfred Kaltz and Horst Hrubesch were an interesting pair.   They were Batman and Robin of football. Manfred Kaltz was one of the best crossers ever played the game.  His crosses were known as "Bananenflanken" (Banana crosses) because they curved liked a banana. Nicknamed "Das Kopfball-Ungeheuer" (the Header Beast), Hrubesch was one of the greatest headers of the ball.  He could header the ball with precision and power.  When the best crosser teamed up the best header of the ball, they became one of the most dynamic duo ever played the game.  In fact, Sven-Göran Eriksson was very concerned about them when IFK Göteborg met Hamburger SV in the Final of the 1982 UEFA Final a year earlier.  However, against Juventus, it was Felix Magath who scored the winner.  Magath who was the son of an American serviceman stationed in Germany was probably the most underrated German players of his generation. Just 9 minutes into the game, he shot the ball from the left corner of the box and the ball sailed straight into the right upper corner of the goal.  Hamburger held on and won their first European Cup in history.