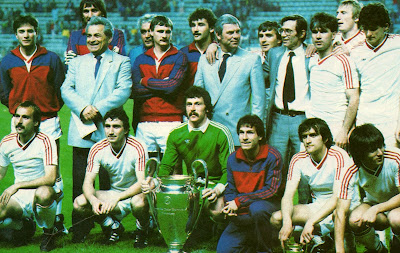 This is my selection of a 25 member all-time team for the club.  The number 25 was chosen because it is the official squad size for the Champions' League.

The team had previously belonged to the Romanian Army, however the football department separated in 1998. The Army sued the club in 2011 and has since been in a conflict regarding the ownership of the Steaua brand, which led to the change of the name to the acronym FCSB in 2017.  The Golden period of the club was in the 1980's when it won the European Cup in 1986. Please read my blog: Forgotten Great Team: Steaua București 1986-1989 for more information on the rise of the team in the 1980's.
Team

GK: Ion Voinescu (Romania)
He is regarded as one of the greatest Romanian keeper.  He won 22 caps for Romania. He also played for Romania at the 1952 Summer Olympics. For his club career, he started with Metalul Bucureşti. In 1950, he moved  to Steaua Bucureşti, from where he retires from professional football in 1963. He was linked with a move to Arsenal in England, but it was impossible for him to leave the communist country in his era.

GK: Silviu Lung (Romania)
Lung was capped 77 times for Romania between 1979 and 1993, and represented his country at Euro 1984 and the 1990 World Cup, where he was captain in all four matches.  He reached the European Cup Final in 1989, where AC Milan beat Steaua Bucureşti 4-0.  He also played abroad, in Spanish team CD Logroñés. He returned to Universitatea in 1992/93 and retired in 1994.

GK: Helmuth Duckadam (Romania)
Helmuth Duckadam joined FC UTA Arad in 1978 to become professional. He earned two full caps for Romania in 1982 and, subsequently, was signed by FC Steaua Bucureşti. He was best remembered as the keeper who saved four consecutive penalty shots in the shootout against Barcelona in the 1987 European Cup Final as Steaua București became the first ever Romanian club to win an European trophy.  He was dubbed "the Hero of Seville".

RB: Dan Petrescu (Romania)
With Steaua Bucharest, Petrescu won the 1989 European Cup Final, and the Cup Winners' Cup with  Chelsea. He played 95 times for Romania.  He went to the World Cup team in 1994 and 1998, and European Championship in 1996 and 2000. At the 1998 World Cup Finals, Petrescu raced past his Chelsea teammate Graeme Le Saux and scored the winning goal against England, which put them in the Group standing.

Iovan played for CSM Reşiţa and Luceafărul Bucureşti. In the winter of 1981 joined Steaua Bucureşti where he played for ten years, until 1991.  He was also the team's captain when they won the European Cup in 1986.  He later played the English club Brighton & Hove Albion, Rapid Bucharest, Electroputere Craiova and CSM Reşiţa. He won the European Cup in 1986.  Capped 35 times.
CB: Anton Doboș (Romania)
Dobos debuted with U Cluj in 1988. He went to Dinamo Bucureşti in 1989 and helped win one league title before he headed to their rival team Steaua Bucureşti, where he helped win four league titles. Doboș capped 23 times. He was in the squad for the 1998 World Cup and Euro 1996. After Euro 1996 he signed with AEK Athens FC in Greece.

CB: Ștefan Sameș (Romania)
Sameş began playing football for the youth side of FC Steaua Bucureşti. He made his Romanian first division debut at age 19, playing for FC Universitatea Craiova while on loan from Steaua in 1971. After two seasons in Craiova, he returned to Steaua and made 274 league appearances for the club and was named Romanian footballer of the year in 1979.  Capped 47 times.

CB: Daniel Prodan (Romania)
Prodan came to prominence with FC Steaua București, having signed in late 1992 from hometown side FC Olimpia Satu Mare. With the capital club he won five consecutive Liga I titles. In 1997, he joined Atletioc Madrid.  A year later, he joined Rangers, but never played for them due to an injury. He earned 54 caps, and went USA 1994 and Euro 1996 in England.

Apolzan was considered to be the first ever sweeper in the game of football.  Apolzan signed his first contract with Şoimii, a local team from Sibiu, in 1941. After the war he joined CFR Bucharest and then between 1949 and 1962, he played for Steaua Bucureşti until his retirement. He had 22 caps, but he played in an ear where international opportunity due to the War and the condition of Romania after the War.

SW/CB: Miodrag Belodedici (Romania)
He helped Steaua become the first Eastern European club to win the  European Cup in 1986.  In 1988, he deflected to Yugoslavia.  He joined Red Star Belgrade, winning the 1991 European Cup, the second time an Eastern European side to win the European Cup. Between 1984 and 2000, he played 55 times for Romania, but missing three years of action because of the ban imposed after his deflection. He played in USA 1994, Euro 1996 and 2000.

DM/CM: Constantin Gâlcă (Romania)
Constantin Gâlcă first made a name for himself at Steaua București, then proceeded to spend one full decade in Spain, playing in 318 matches in both major levels combined and representing five clubs. Additionally, Gâlcă appeared for Romania in two World Cups(1994 and 1998) and as many European Championships(1996 and 2000), gaining 68 caps.


CM: Tudorel Stoica (Romania)
In 1975, Tudorel Stoica transferred to country giants FC Steaua Bucureşti from FCM Galaţi. He was part of the squad that won the 1985–86 European Cup, even though he did not play in the final. In 1989, 35-year-old Stoica moved abroad for the first time, playing one season in France with second level side RC Lens.

CM: László Bölöni (Romania)
László Bölöni was the hero of the qualification campaign for Euro 1984, where Romania qualified for the Finals in France.  Bölöni's first team was Chimica Târnăveni. In 1970, he moved to ASA Târgu Mureş where he stayed until 1984, when he joined Steaua Bucureşti, being part of the team which won the European Champions Cup in 1986. He was also a part of Steaua Bucureşti that won the European Cup.

CM: Ion Dumitru (Romania)
Ion Dumitru played mainly for Rapid Bucureşti and Steaua Bucureşti.  He played 47 times for Romania between 1970 and 1980.  He represented his country at the 1970 World Cup Finals. He is widely regarded as one of Romania's greatest players. He won the Romanian Footballer of the Year in 1973 and 1975.

AM: Marcel Răducanu (Romania)
Between 1976 and 1981, Marcel Răducanu played 21 games for Romanian national team.  After playing for Steaua Bucureşti in the 1970s,  Răducanu defected following a match in Dortmund, West Germany in 1981. He was sentenced to nearly six years in prison in his absence for his action.  He also played for FC Zurich.

AM: Gheorghe Hagi (Romania)
Nicknamed "The Maradona of the Carpathians",  he was probably the best player in Romanian football history.  He was named Romanian Footballer of the Year seven times.  He had 124 caps. He led Romania to the quarter-final in the1994 World Cup Finals.  He scored one of the most memorable goals of that tournament.  Fir club football, he was best remembered for wining the UEFA Cup with Galatasaray, the first ever Euopean trophy by a Turkish club.
LW/FW: Nicolae Tătaru (Romania)
Nicolae Tătaru signed with Steaua Bucureşti in 1952, after three months when he played for one of Steaua's second teams, Armata Craiova. He was a part of Steaua's Golden team, playing also for the Romania national football team. He earned 24 caps for Romania, scoring three goals.  He was their captain for some of the matches.

LW/FW:  Adrian Ilie (Romania)
Adrian Ilie won 55 caps for Romania, scoring 13 goals.  He played at the Euro 1996, 1998 World Cup and Euro 2000.  During his 3 years with Steaua, Ilie helped the club to 3 consecutive Romanian league titles and the 1995–96 Cupa României. In 1996, Ilie was purchased by Galatasaray. Two years later, he joined Valencia. At Valencia, he was part of a great team that went to the European Cup Final in 2000.

FW: Marius Lacatus (Romania)
Marius Lacatus was an icon for Steaua Bucureşti, being the team's captain between 1994 and 1999. He was a key player as his club won the 1987 European Cup.  He also played for AC Fiorentina of Italy and Real Oviedo of Spain, but his career outside Romania was not too successful.  He played for his country in the 1990 World Cup Finals, Euro 1996 and 1998 World Cup Finals.  In Italia 1990, he scored two goals against the Soviet Union.

FW: Anghel Iordănescu (Romania)
Anghel Iordănescu is one of Steaua București's greatest players. He scored 155 goals, becoming the team's highest ever goalscorer. In 1982, aged 32, Iordănescu left Romania to play for OFI Crete in Greece under head coach Les Shannon, but returned to Steaua two years later to become the club's assistant manager.  He was capped 57 times between 1971 and 1981.

ST: Victor Pițurcă (Romania)
In 1983, Victor Pițurcă joined  Steaua, helping the club to win European Cup in 1986 and the European Supercup in 1987.  As for domestic performances, Pițurcă won the championship with Steaua București five times and the Romanian Cup four times. At the end of the 1987–88 season he was the top scorer of Liga I and won UEFA's Bronze Boot.  Capped 13 times.

ST: Gheorghe Constantin (Romania)
Known as "The Professor", he was a symbol of Steaua Bucureşti. After playing several clubs, he signed with Steaua Bucureşti in 1955. He spent 15 years, with the club scoring 149 goals. In 1969, he joined Kayserispor in Turkey. He made his debut Romania against Yugoslavia; that was a game made notable by the fact that the whole Romanian team was made up of players from Steaua Bucureşti. Constantin attended at the 1964 Summer Olympics.

-- FC Steaua București became the first East European club to win the European Cup when they beat Barcelona in Sevilla in 1986.  From the 1986 team, I selected the following players: László Bölöni, Helmuth Duckadam, Ștefan Iovan, Marius Lăcătuş, Ilie Bărbulescu, Tudorel Stoica and Victor Pițurcă.
-- Gheorghe Hagi, Silviu Lung, Anton Doboș, Ilie Dumitrescu and Dan Petrescu played in the 1980's, but they were not members of the 1986 team that beat Barcelona at the European Cup Final. They were a part of the team that reached the 1988-1989 European Cup Final, where they lost to AC Milan.
-- Gheorghe Hagi made his debut with the club at the European Super Cup in 1986.  He scored the only goal in the Final. He was on loan to Steaua București for a single match, but Steaua București decided to keep him.
--  Please read my blog: Forgotten Great Team: Steaua București 1986-1989 for more information on the rise of the team in the 1980's.

-- Helmuth Duckadam has done in one game more than any Steaua goalkeeper in their careers. He was the "Hero of Sevilla". He saved four consecutive penalty shots in the shootout against Barcelona.  Barcelona who had not won a single European Cup at that point was expected to lift the trophy.  The Final was also played in Seville, Spain, where the stadium was filled with Barcelona's fans.
-- A large number of my players are from the Golden Generation of the mid-1980's. Following the Romanian Revolution, the club lost its support from the army. The Ceaușescu regime was gone. Adrian Ilie is the only player selected who started his football career after the Revolution.
-- In the 1980's, the Ceaușescu regime sent the best players to play for Steaua. However, Gheorghe Popescu was only on loan to the club for a single season. He was not considered for this team because his spell was too short.
-- There are too many right backs.  I dropped Lajos Sătmăreanu and Vasile Zavoda.
-- Miodrag Belodedici deflected to Yugoslavia in 1988 and joined Red Stars Belgrade. He helped them to win the 1991 European Cup, which made him the only player to have won the European Cup with two different Eastern European team.
-- Marius Lacatus was highy rated when he was playing here.  He did not have a strong career in the West.  So he was not as well-known as some of the players listed over here.
-- Florea Voinea and Iosif Vigu were the last two players dropped.
-- Anghel Iordănescu was the chairman of Steaua Bucureşti during the team's golden era, between 1985 and 1989. He was recently declared as Steaua Bucharest's Man of the Century mainly for his role as the chairman. 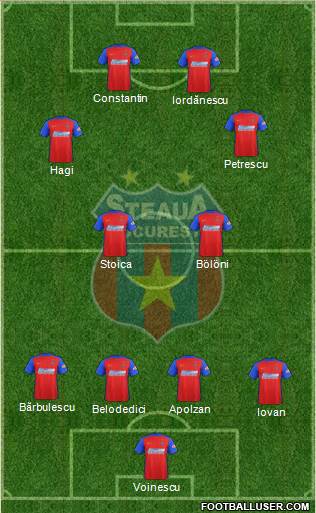