This is my selection of a 25 member all-time team for Real Madrid. The number 25 was chosen because it is the official squad size for the Champions' League.

Real Madrid is the most successful club in soccer's history.  They have won more titles in Europe than any other clubs. Led by President Santiago Bernabeu, the club began to dominate European football during the 1950's.  They won five straight European Cup between 1956 and 1960.  The team that beat Eintracht Frankfurt in 1960 was widely considered to be greatest club in history.  At the time of writing, they won a record of 12 European Cups/Champions' league titles.  They won a record 6 European Cups, and after the European Champions League became the Champions' League, they won 5 more, also a record for the competition.
The Team
GK: Ricardo Zamora (Spain)
The first ever star goalkeeper in history.  He is also remembered for a spectacular last minute save he made in the 1936 Copa de España final while playing for Real Madrid against FC Barcelona. The award for the best goalkeeper in La Liga, the Ricardo Zamora Trophy, is named in his honour and he was voted one of the greatest players of the 20th century by World Soccer magazine. He was also Spain's most capped player for 45 years.

GK: Iker Casillas (Spain)
Iker Casillas is Spain's most decorated goalkeeper and widely considered to be one of the greatest ever goalkeepers. He spent 16 seasons with Real Madrid and won three Champions' League with Real Madrid.  For Spain, he captained Spain into winning the World Cup in 2010 and two European Championships in 2008 and 2012.  He is capped over 150 times between 2000 and 2016, appearing in every major tournaments in that period. He also played for Porto at the end of his career.
GK: Franisco Buyo (Spain)
Franisco Buyo at the time of his retirement was the third highest keeper in La Liga appearance record.  He spent over a decade with Real Madrid (1986-1997), winning 13 titles with them. Before Real Madrid, he played for Mallorca, Deportive La Coruna and Seville. He earned 7 caps for Spain between 1983 and 1992. He went to the European Championship of 1984 and 1988 as a backup.


CB/RB: Sergio Ramos (Spain)
Sergio Ramos is a part of the all-conquering Spanish team that won the 2010 World Cup and two European Championships in 2008 and 2012.  He is the youngest player ever to receive his 100th caps. He joined Real Madrid as a teenager from Sevilla. He scored the tying goal as Real Madrid won their 10th European Cup in 2014.  He also won his second Champions' League title by scoring a goal in the 2016 Final.  In 2018, he won his fourth Champions League Cup with Real Madrid..
RB: Chendo (Spain)
Chendo was a product of Real Madrid academy.  He played his entire career with Real Madrid.  He won 17 major trophies with the club. He was a part of the team that won back-to-back UEFA Cup titles in the mid-1980's.  He retired after the 1998 European Champions' League Final.  He had 26 caps for Spain.  He represented them at both World Cup Finals in 1986 and 1990.

CB: Jose Santamaria (Uruguay)
Jose Santamaria was a member of Real Madrid's all-conquering team of the late 1950's.  He spent his 18-year career with Nacional and Real Madrid, winning 17 major titles the two teams combined, including four European Cups with the latter.  He was considered one of the best ever center-backs. He played for Uruguay at the 1954 World Cup Finals, but played for Spain 4 years later in 1958.

CB/CM:  Fernando Hierro (Spain)
Fernando Hierro is considered to be Spain's greatest defenders.  At one point, he was Spain's all-time leading scorer even through he played as a defensive player.  He was capped 90 times for Spain, whilst appearing in four World Cups: 1990, 1994, 1998 and 2002 and two European Championships: 1996 and 2000. For Real Madrid, he won three Champions' League titles and 5 La Liga titles.  He also played for Real Valladolid, Bolton Wanderers and Al-Rayyan SC.
CB: Manuel Sanchis Hontiyuelo (Spain)
Manuel Sanchis Hontiyuelo is the son of Manuel Sanchez Martinez, another all-time great with Real Madrid. He was was a member of the legendary Quinta del Buitre of Real Madrid.  He spent his entire career with Real Madrid and played over 700 matches.  He won back-to-back UEFA in the mid-1980's, and then, two Champions' league title at the end of his career.  For Spain, he was capped 48 times.

LB: Roberto Carlos (Brazil)
Roberto Carlos was regarded one of the best leftbacks in history.  He had 125 caps for Brazil playing in three World Cup Finals. He won 3 Champions League titles with Real Madrid and one World Cup title with Brazil in 2002.  In 1997, he was runner-up in the World Player of the Year.  He is especially famous for a free kick from 35m out against France in the  Tournoi de France 1997. The goal is considered one of the greatest goals ever scored.
CM: Fernando Redondo (Argentina)
Fernando Redondo played his first game in the Primera División at only 16 for Argentinos Juniors, and remained five years with the team before moving abroad to CD Tenerife in Spain.  He joined Real Madrid in 1994, where he would become one of the best central midfielders in Real Madrid's history.  He won two Champions' League with them. For the national team, he only picked up 29 caps because he had issues with various managers.
DM:  Jose Pirri (Spain)
Jose Pirri is regarded as one of Spain's greatest player.  He had 41 caps in a career that lasted 12 years. He played in two World Cup Finals: 1966 and 1978. He played for Real Madrid for 15 years, between 1964 and 1979, winning ten Spanish league titles, four Spanish cups, and the 1966 European Cup. He was a member of the Real Madrid team that was known as the Yé-Yé team.  He also played for Granada.
RW/FW: Amancio Amaro (Spain)
Nicknamed "El Brujo", Amancio Amaro played outside right for Deportivo de La Coruña before joining Real Madrid in 1962.  He was considered the star of the team in the 1960's. He scored one of the most beautiful goal in European Cup history when Real Madrid lifted the title in 1966.  He was capped 42 times. He won the 1964 European Football Championship.

AM/RW: Raymond Kopa  (France)
Kopa was considered to be "Les Bleus"'s greatest player before the emerge of Michel Platini. In 1970, he became the first football player to receive the Légion d'honneur. He helped France to finish third at the WC Finals in 1958. He won the the European Footballer of the Year in 1958 and won three European Cups with Real Madrid in the 1950's.  He also played with Stade de Reims before joining the legendary Real Madrid team of the 1950's. He won the 1953 Latin Cup with Reims.

LW:  Francisco Gento (Spain)
Francisco Gento is regarded as one of the greatest left wings in history.  Gento began his career at Racing Santander in 1952 and moved to Real Madrid the following season. He appeared in a joint record eight European Cup finals, winning a record six, as well as winning 12 La Liga titles.  In a 14-year international career, Gento earned 43 caps for Spain, playing at the World Cup in 1962 and 1966.

AM: Zinedine Zidane (France)
Zinedine Zidane was named the best European footballer of the past 50 years in the UEFA Golden Jubilee Poll, and has been described as one of the greatest players in the history of the game.  He won the FIFA World Player of the Year award three times.  He led France to victory at  the World Cup in 1998 and the European Championship in 2000.  With Real Madrid, he also won the Champions League in 2002, where he scored one of the greatest goals in history at the Final.
CM: Luka Modric (Croatia)
Modric is one of the greatest playmakers of his generation. He earned more 90 caps for Croatia.  He currently plays for Real Madrid and won the Champions' League for the 2013-2014,  2015-2016, 2016-2017 and 2017-2018 seasons.  He also played with Dinamo Zagreb and Tottenham Hotspurs.  He played in the World Cup Finals of 2006 and 2014, as well as the European Championship of 2008, 2012 and 2016.
CM/AM/FW:  Alfredo Di Stefano (Argentina)
Alfredo Di Stefano is the best player in the world before the emerge of Pele and Diego Maradona. He was one of the younger members of the great River Plate in the 1940's.  In 1949, he moved to play in Colombia before moving to Europe in 1953.  He won 5 straight European Cups with Real Madrid. He was credited in turning Real Madrid into a legendary club. His international career was limited to the fact that Argentina did not select overseas players.  He also played for Argentina, Colombia and Spain. He went to the 1962 World Cup Finals, but was injured.
ST: Emilio Butragueño (Spain)
Nicknamed El Buitre (The Vulture), Emilio Butragueño was a member of the legendary Quinta del Buitre of Real Madrid, along with Manolo Sanchís, Rafael Martín Vázquez, Míchel and Miguel Pardeza. That team won 5 straight La Liga and back-to-back UEFA Cups from 1985 to 1990.  He went to the World Cup Finals in 1986 and 1990.  He scored 4 goals against the great Danish side in 1986 quarter-final. He also played in the 1990 World Cup Finals.


ST: Karim Benzema (France)Karim Benzema was billed as one of the best young players in Europe when he played for Lyon.  In 2009, he made a dream move to Real Madrid on the same summer that Kaka and Cristano Ronaldo joined the club.  He won the Champions' League in 2014, where he formed the BBC line with Ronaldo and Gareth Bale.  In 2022, he was Real Madrid players as Real Madrid won the Champions' League. For the national team, he played in the 2014 World Cup Finals as well as Euro 2020.
ST/FW: Ferenc Puskas  (Hungary)
Ferenc Puskas was one of the greatest footballers in history.  He scored 84 goals in 85 international matches for Hungary, a team known as Mighty Magyars. He became Olympic champion in 1952 and led his nation to the final of the 1954 World Cup where he was named the tournament's best player.  He played with Honved at home and went to Real Madrid in 1958 after the Soviet invasion.  With Alfredo Di Stefano, Raymond Kapo, etc, Real Maadrid became the greatest club team in history.
ST: Raul (Spain)
Raul was probably the best Spanish player in the late 1990's.  He made his debut with Real Madrid as a 17 years old.  He won 3 Champions' League trophies with Real Madrid in 1998, 2000 and 2002.  He moved to Germany in 2010 and played with Schalke 04 He is the fourth highest goal scorer in the history of La Liga with 228 goals.  For Spain, he scored a then-record 44 goals in 102 appearances, appearing in three FIFA World Cups and two European championships. He was their captaincy between 2002 and 2006.

ST: Hugo Sanchez (Mexico)
Hugo Sanchez was considered to be the best Mexican player of all-time. He is remembered for his career in Spain where he played for both Atletico Madrid and Real Madrid.  He won 5 straight Pichichi title in Spain.  With Real Madrid, he won five consecutive league titles (from 1985-86 to 1989-90), the Copa del Rey in 1989, and the UEFA Cup in 1986.  The team was the dominant team in Spain during the 1980's. 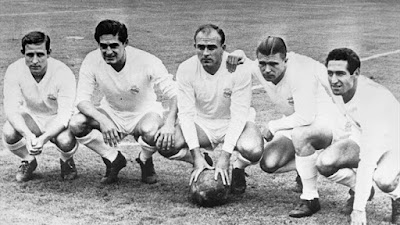 Formation
-- Sergio Ramos is a better centerback than rightback, but he won't start ahead of Hierro or Santamaria.  So I put him at rightback.
-- Raul is not a centre forward so I put him on the right side as a secondary striker or forward. This was the only way where I can play both Raul and Cristano Ronaldo.